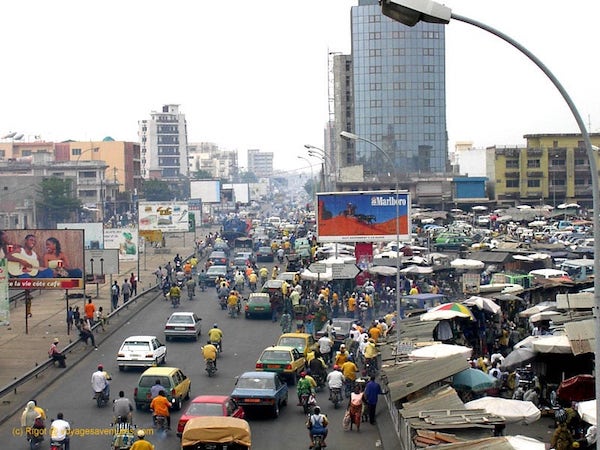 Doug Casey’s Note: Few people travel to Africa. If they do, it’s with a guided tour to Morocco or Egypt. But those hardly count, in part because those countries aren’t African as much as Arabic.

To others, “Africa” is a guided safari in Botswana or Kenya to see the animals. Nice, but that’s the sanitized Disneyland version of the real Africa… more like seeing a big zoo than Africa itself. And the Africans you’ll see will be highly atypical.

This article will give you a flavor of the real Africa. As well as why the continent is accurately characterized as a shithole, why millions of its residents are trying to leave, and why the place is going nowhere. Let me hasten to add, however, that Africa remains my top choice for an opportunity-seeking entrepreneur. But that’s a different subject.

There’s much more that my friend Francois can say about Benin in particular and we can say about Africa in general. But this will give you a flavor of what it’s really all about.

The Gulf of Guinea stretches from the southern tip of Liberia all the way down to the shores of Angola. I’m no cartographer. Up to yesterday I thought it was all Atlantic Ocean, but I’ve had a long day and am eager to swim in it.

In my trunks I walk out the back of my hotel and step onto the long pool patio. It extends down to the sandy beach. Beyond, wavy Guinea Sea waters and blue, unpolluted African sky. I admire it, my breathing suspended, for a short moment.

Startled, I glance to my right. Twenty feet away, a long table seats a party of ten Chinese and three Africans. Elbows raised, glasses in the air, they are toasting to something. And they are loud. “Ganbei!” They start up again, the Africans joining in. I’m guessing ganbei means “cheers.” I stare intrigued and away they go, “Ganbei!” again and again.

Some people are very happy this evening – not for philosophical reasons, but because they’ve made a lot of money. I’d like to know why or maybe how.

I’ve decided to use this hotel as my base while in Cotonou, Benin, because it’s beach-front, a French four-star with a good breakfast. I’m staying for ten days, max. That should be enough to find some resources to sell abroad – commodities like beans, cotton, and cocoa – and get a letter of intent signed by a government minister for a solar project. It won’t be worth the paper it’s printed on, but it gets me into offices and in front of presumable players, gets them talking, and helps me understand the system.

From 1972 up to 1989, Benin was a Marxist Leninist regime, loosely aligned with the Soviet Union. After a disastrous economic situation and no further support from the dissolving Eastern Bloc, the government converted to a democracy. Since then Benin has been highly praised for its large voter turnout. Over seventy percent go to the polls. In an African country, that means, in practical terms, that seventy percent of its people are playing a kind of lottery, except there is no jackpot.

Corruption and poverty are everywhere, but truth be told, not as bad as in Togo. Benin’s economy is favored by the re-export and transit trade with Nigeria, its big neighbor to the east, and growth moved up from 5.6 % in 2017 to 6% in 2018.

I finish my breakfast and while waiting for my driver, look over the letter of intent one last time.

Cotonou looks like most other African cities I have visited so far. There is a lot of dust. And crowds of young people. Spotting men or women over fifty-five or sixty is a rarity. Africa kills you before you grow old.

On the way to the ministry, we drive by a corner gas station with a small supermarket. Rusty Toyotas are parked in front, local taxi drivers waiting for a customer. A shiny, black Mercedes S-class catches my attention.

Chinese diplomatic flags are flying from its hood sides. A distinguished Chinese – a senior government official – strolls out of the market carrying what looks like a three-bottle wine pack. The limo driver opens his door. Maybe that man has something to celebrate, I think to myself. Or maybe he’s just a Chinese who likes his alcohol.

We slow down; there’s a bottleneck up ahead. An overpass is being built. As our car crawls past the construction site I see another Chinese by the side of the road, directing construction work.

A throne glitters against the far wall of the minister’s office. We are ushered in and seated in front of it. It’s actually a disproportionately large, excessively decorated armchair raised on a two-foot base. A few minutes go by and the minister walks in. He’s a short, thin man, dressed sharply in a suit and tie. He steps onto the base and sits down, and I am introduced as the foreigner in the room. He is given the letter of intent and he glances at it. Twenty minutes later he stops talking, and it is understood we have to leave. I walk out of the room but the LOI stays, unsigned.

Back in the hotel lobby, I head for the elevator. The large Chinese delegation is on their way out. I slow down, smile, and “Hello” the whole group. They look at me and keep walking, offering no reply. Next time I will try with ganbei instead of hello.

The patio is where I work and try to use time productively. I hear American English spoken a few pool chairs down from mine.

Three beers and two hours later, I have heard interesting stories from Bob and John, two Americans who are looking to buy African gold in bulk – discounted, possibly. One is an ex-New Jersey state prosecutor, a tough, weathered guy who doesn’t look ready to retire. The other one is a metals expert with decades of experience.

“They tell us we have to trust them while they are trying to screw us,” says Bob, the ex- prosecutor.

I chuckle several times as they tell me stories of trying to buy gold in Africa. Phony gold loaded onto planes, real gold loaded onto planes but confiscated just prior to departure, planes diverted into the desert, planes held at gunpoint. It’s not clear to me whether they have managed to fly any gold out of Africa yet. Or more particularly, if any gold actually arrived at a Swiss or Dubai gold foundry and they got paid for it.

“We are old fashioned. We buy it only if we see it,” they tell me.

That means everything and nothing at all, I guess. I ask about the Chinese.

“Hard to know, but you see them everywhere.”

The conversation winds down; it’s late in the afternoon. Bob and John fall asleep. I head back to my room.

Night time is a dangerous time to go out in Africa and I never do. There are hardly any ambulances available even if you have an accident during the day. At night, you will bleed by the side of the road until breakfast time. I step out of the hotel and onto the parking lot, looking for the hotel taxi. This evening I’m going to a club nearby, making an exception to my rule.

The joint is a former office on the first floor of a 1970s glass high-rise building. I receive a lot of looks from the ladies as I get my drink at the bar. As beautiful as a few of them are, I’m not flattered. African women come to this club to find an airline ticket out of Africa.

I sit down with my back to the wide windows and look around. A few white men in their sixties, getting entertained; a few African couples dancing; and not much else. There’s a young Chinese guy sitting on the couch in front of me. An African girl is close to him, and they are holding hands. He’s small, wears his spectacles like an engineer. I look at the girl. She looks back and we lock eyes for a beat. I don’t look away and neither does she.

I know your game, I’m telling her, but she beams back as if she knows mine.

I get up because I see nothing in the room more interesting than my hotel bed.

The next morning, aside from a quiet couple in the far corner of the dining room, I am the only one having breakfast. No sign of Bob and John or the Chinese party. I grab a fresh copy of the local newspaper and sit down. I stare out the wide windows at the beach. Coffee comes soon and I begin eating.

My eyes fall on the front-page headline of the newspaper: “Niger-Benin build oil export pipeline to Cotonou.” Somewhat interesting, so I keep reading. “The pipeline will cost four billion US dollars. It will be managed by the China National Petroleum Corporation (CNPC) with the participation of both host countries.”

I look up and see Kwame, the assistant to the minister. Kwame is in his early thirties. He’s got a smile on his face as he waves some papers.

He hands me the letter of intent, and I put it on the table next to the Chinese/Niger-Benin deal article. The LOI is indeed signed by the minister.

Kwame is a nice guy and he did go out of his way to get this done.

I look at up at him and smile.

“You mean, we need to ganbei.”