From Williamsburg to Athens 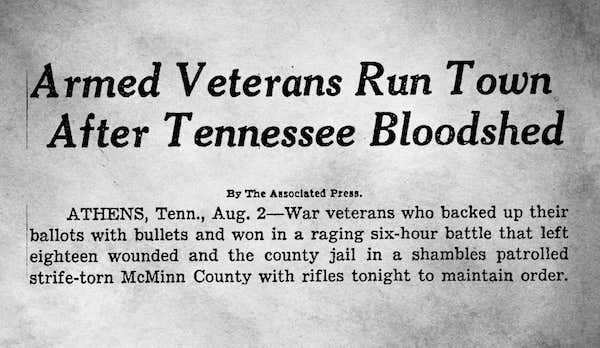 In 2018, International Man published an essay entitled, “The Right to Bear Arms,” in which I described the events that inspired America’s founding fathers to write the Second Amendment to the Constitution.

The reason that they were so adamant about the right to bear arms was that the events that occurred in Williamsburg, Virginia, that inspired its creation were still fresh in the mind of Thomas Jefferson, who had been living in Williamsburg at the time.

In 1776, the colonists, having become distrustful of British rule, began to form militias. In response, Governor Dunmore, who represented King George, seized all the gunpowder and armaments that were stored in the brick magazine for the protection of the colonists.

The city council demanded their return, stating that they were the property of the colony, not the Crown. Patrick Henry led the Hanover County Militia – about 150 men – to Williamsburg to reclaim the gunpowder.

It should be borne in mind that, at that time, every household possessed firearms, and all men knew how to use them, as every family needed to both hunt and protect themselves against Indian attack. Additionally, the colonists far outnumbered the British troops. The reasons the people of Williamsburg succeeded in their quest was that they far outgunned the British regulars and acted quickly and decisively.

In spite of the importance that these events have had to Americans for the last 243 years, they’ve disappeared from US history books, and virtually no American is aware of them, or the important lesson that they teach as to why the people should be armed.

But just as obscure as the Williamsburg insurrection is the Battle of Athens – that is, Athens, Tennessee – in 1946.

During the war years, the family of Paul Cantrell captured control of the town through election fraud. They took control of law enforcement, the schools and the media. To make matters worse, police under Cantrell received no salaries. They were advised by the sheriff to obtain their pay through shakedowns of the public.

But over 3,000 GIs returned to Athens after the war. They eagerly sought a change in leadership, and the election of 1946 promised them that opportunity.

It became clear to all that the Cantrell faction would be voted out of power. However, as they controlled the sheriff, they instructed him to hire 200 deputies to man the polling places. At the close of voting hours, Cantrell ordered that the ballot boxes be removed, to be counted by Cantrell henchmen at the Athens sheriff’s office.

When the former soldiers discovered this, they broke into the National Guard Armory and removed rifles, machine guns and ammunition. (Sound familiar?)

They stormed the sheriff’s office. The sheriff and his men were no match for the war-hardened GIs and surrendered both themselves and the ballot boxes.

When the votes were later counted, the Cantrells were finished. New leaders were installed and none of the GIs was charged with a crime.

It should be borne in mind that, at that time, the men had recently served in the war. They knew how to use firearms and were unafraid to go up against a common enemy. The townspeople far outnumbered the police. The reasons the people of Athens succeeded in their quest was that they far outgunned the police and acted quickly and decisively.

And that brings us to the present day. Just as in Athens, Tennessee, in 1946, the police now top up their wages through civil asset forfeiture. And the authorities are most certainly planning for dramatic civil unrest.

The US is living in the post-constitutional era – a time when virtually all of the rights that the US founding fathers laid down have been removed by one means or another. But there’s a right that lingers – the Second Amendment – the right to bear arms.

Not surprisingly, a major campaign is underway to eliminate this right. Roughly half the population of the US has become convinced that only the authorities should be allowed to bear arms.

These people either do not know their history and therefore don’t understand the reason for the amendment, or they’ve been conned into believing that when the authorities have all the guns, they will only do good things with them.

Those who study history understand that this is almost never true.

Just like Governor Dunmore and Senator Cantrell, political leaders do not disarm the populace for benign reasons, but to institute force.

But for those who live in the US and understand that the government is pushing a major campaign to remove the means to rebel against an oppressive government, the above incidents may bring hope that the populace can always get together and take back the reins of power.

Unfortunately, that may no longer be so. As stated above, in 1776, every household had one or more muskets. All males and many females were experienced in using them.

In 1946, a significant portion of the Athens, Tennessee, population had just returned from war. They too had no reluctance to make use of firearms wherever necessary.

And how about their opposing forces? In 1776, the British regulars were no better armed than the colonists and were fewer in number. In 1946, the police were not as well armed as the soldiers, who had machine guns, and they, too, were outnumbered.

Today, by contrast, all police departments have riot-trained police, riot gear, armored vehicles and semi-automatic weapons. In addition, they have the training to respond quickly and act as a unit, quickly dealing with any act of rebellion that occurs.

And today, their numbers are considerable. The city, county and state police are backed up by the TSA, FBI, DEA, CIA, Homeland Security and National Guard, plus dozens of other agencies – tens of thousands of officers, each with a badge and a gun. To be sure, their numbers in total are lower than the entire population, but they can be deployed almost anywhere in a very short period of time – something that wasn’t possible in 1776 or 1946.

Many Americans who are reading the warning signs correctly are stocking up on weapons and ammunition and will even tell their neighbours over coffee, down at the diner, that they’re prepared to “make a stand.”

However, when push comes to shove, few people will be prepared, if and when a SWAT team charges their home. Certainly, the possibility of either outgunning the authorities or acting quickly and decisively is unlikely.

Confrontation is a very short-term solution at best.

For any American who regards his liberty as a primary right, a more promising possibility might be to consider relocation to a country where liberty continues to thrive.

Editor’s Note: Politically, economically,and socially, the United States seems to be headed down a path that’s inconsistent with the founding principles of the country.

The situation is advancing rapidly on multiple fronts – civil liberties are under attack, government money printing is on overdrive and PC culture has run rampant. And it’s likely that the time ahead could be an increasingly volatile.

Doug Casey and his team just released this free PDF report that outlines what it’s all about and what you can do about it. Click here to see the details now.