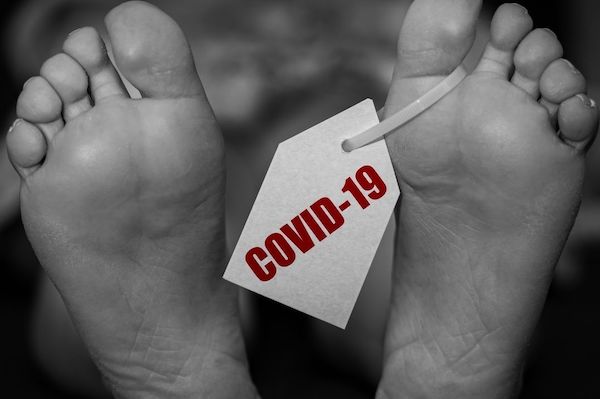 It’s an old saying, but never truer than today, when profoundly false figures are being used to fuel the COVID hysteria.

In less than one year, the rulers of the US and many other countries have successfully closed down businesses, decimated social interaction, shut down those who sought to seek group solace in their faith, trashed economies and forcibly seized power, replacing democratic structure with executive edict.

This has been achieved solely through the creation of fear over a flu virus.

Mother Jones has stated, “The staggering death toll was both preventable and entirely predictable. Even aside from his vast personal incompetence… Trump blithely put into practice cherished conservative principles that are incompatible with a decent pandemic response. Castigating and de-legitimizing government institutions, demonizing minority communities, and playing into white grievances may help Republicans win elections, but when it comes to beating back a massive public health catastrophe, what’s paramount is robust public agencies, a strong health care system, and special attention to the vulnerable. In many ways, we were doomed from the start.”

Pretty scathing. As we can see, the media are not just commenting, but handing out pitchforks to the villagers. As in all irrational calls to arms, the former president has already been convicted of genocide in the court of public opinion. By comparison, Dr. Fauci, who has served as the government’s expert physician has been left off the hook entirely; yet no eyebrow is raised.

Some people in the US will swear by the above statements, whilst others will say that they are exaggerations and misinterpretations.

Interestingly, however, most all Americans seem quite willing to accept the 400,000 death count as being accurate.

And yet we can obtain the A.M.A. and/or CDC/NCHS annual All-Cause death statistics and both sources offer up a very different picture.

Let’s have a look:

The only way that the coronavirus could be responsible for 400,000 deaths in the US in 2020 would be if at least 367,000 people conveniently ceased dying of other causes, such as heart failure, car crashes and cancer.

“Without those added deaths, there would be no evidence of a Covid pandemic. This triangulation of facts: essentially no excess deaths beyond the normal annual background count; absolutely NO relationship between Covid “confirmed” cases and Covid “confirmed” deaths; and the mysterious, last-minute dump of 268,259 all-cause deaths into the 2020 end-of-year all-cause death totals; completely demolish any pretext of their having been a 2020 viral pandemic, whether caused by a novel coronavirus or by anything else and that therefore there is no rational reason to be putting masks on children, isolating elders, destroying businesses, locking down populations and shattering the public trust.”

Quite so. I couldn’t have phrased it better.

But if all the misery that has occurred in the past year has been unnecessary – that is, if this was just another in the series of coronaviruses that have caused a periodic nuisance for over sixty-five years – why have all the lockdowns, loss of jobs, loss of personal liberties, etc., been forced upon people?

Well, in fact, that question may be easily answered. All we really need do is to ask ourselves what a government would accomplish by imposing such draconian requirements.

What we see all around us is a people who have been subjugated. “Inalienable” rights that we are supposed to enjoy have been removed. In their place is a state of tyrannical rule. Any demands that have been made by the government, no matter how irrational, have been instituted through force and the populace have caved in to it all.

What might otherwise have taken decades of incremental depreciation of rights has been accomplished in a very short time.

And just in time, too. For dramatic changes are in store in the form of rule that the country will live under very soon. A litany of new plans has been put forward that will effectively eliminate freedoms of every type.

I doubt that it would be a rash prediction to make, that an all-encompassing collectivist plan will be unfolding very soon. And that the fear that has been manufactured will be maintained until the plan is well under way.

Editor’s Note: The ripple effects of the government lockdown are only starting to take shape.

The consequences of which could be crippling to the average person—particularly savers, retirees, and investors.

That’s precisely why legendary speculator Doug Casey and his team just released this free report, which shows you exactly what’s happening and what you can do about it. Click here to download it now.