Doug Casey on Whether Your Vote Can Prevent a Civil War?

It’s not like the consensus of a bunch of friends agreeing to see the same movie. Most often, it boils down to a kinder and gentler variety of mob rule, dressed in a coat and tie. The essence of positive values like personal liberty, wealth, opportunity, fraternity, and equality lies not in democracy, but in free minds and free markets where government becomes trivial. Democracy focuses people’s thoughts on politics, not production; on the collective, not on their own lives.

Although democracy is just one way to structure a state, the concept has reached cult status; unassailable as political dogma. It is, as economist Joseph Schumpeter observed, “a surrogate faith for intellectuals deprived of religion.” Most of the founders of America were more concerned with liberty than democracy. Tocqueville saw democracy and liberty as almost polar opposites.

Democracy can work when everyone concerned knows one another, shares the same values and goals, and abhors any form of coercion. It is the natural way of accomplishing things among small groups.

But once belief in democracy becomes a political ideology, it’s necessarily transformed into majority rule. And, at that point, the majority (or even a plurality, a minority, or an individual) can enforce their will on everyone else by claiming to represent the will of the people.

The only form of democracy that suits a free society is economic democracy in the laissez-faire form, where each person votes with his money for what he wants in the marketplace. Only then can every individual obtain what he wants without compromising the interests of any other person. That’s the polar opposite of the “economic democracy” of socialist pundits who have twisted the term to mean the political allocation of wealth.

But many terms in politics wind up with inverted meanings. “Liberal” is certainly one of them.

The Spectrum of Politics

The terms liberal (left) and conservative (right) define the conventional political spectrum; the terms are floating abstractions with meanings that change with every politician.

In the 19th century, a liberal was someone who believed in free speech, social mobility, limited government, and strict property rights. The term has since been appropriated by those who, although sometimes still believing in limited free speech, always support strong government and weak property rights, and who see everyone as a member of a class or group.

Conservatives have always tended to believe in strong government and nation­alism. Bismarck and Metternich were archetypes. Today’s conservatives are some­times seen as defenders of economic liberty and free markets, although that is mostly true only when those concepts are perceived to coincide with the interests of big business and economic nationalism.

Bracketing political beliefs on an illogical scale, running only from left to right, results in constrained thinking. It is as if science were still attempting to define the elements with air, earth, water, and fire.

Politics is the theory and practice of government. It concerns itself with how force should be applied in controlling people, which is to say, in restricting their freedom. It should be analyzed on that basis. Since freedom is indivisible, it makes little sense to compartmentalize it; but there are two basic types of freedom: social and economic.

But what do you call someone who believes in both types of freedom? Unfortunately, something without a name may get overlooked or, if the name is only known to a few, it may be ignored as unimportant. That may explain why so few people know they are libertarians.

A useful chart of the political spectrum would look like this: 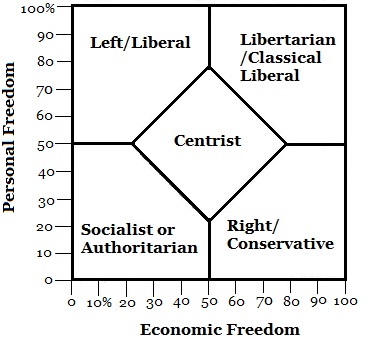 A libertarian believes that individuals have a right to do anything that doesn’t impinge on the common-law rights of others, namely force or fraud. Libertarians are the human equivalent of the Gamma rat, which bears a little explanation.

Some years ago, scientists experimenting with rats categorized the vast major­ity of their subjects as Beta rats. These are basically followers who get the Alpha rats’ leftovers. The Alpha rats establish territories, claim the choicest mates, and generally lord it over the Betas. This pretty well-corresponded with the way the researchers thought the world worked.

But they were surprised to find a third type of rat as well: the Gamma. This creature staked out a territory and chose the pick of the litter for a mate, like the Alpha, but didn’t attempt to dominate the Betas. A go-along-get-along rat. A libertarian rat, if you will.

My guess, mixed with a dollop of hope, is that as society becomes more repressive, more Gamma people will tune in to the problem and drop out as a solution. No, they won’t turn into middle-aged hippies practicing basket weaving and bead stringing in remote communes. Rather, they will structure their lives so that the government—which is to say taxes, regulations, and inflation—is a non-factor. Suppose they gave a war and nobody came? Suppose they gave an election and nobody voted, gave a tax and nobody paid, or imposed a regulation and nobody obeyed it?

Libertarian beliefs have a strong following among Americans, but the Liber­tarian Party has never gained much prominence, possibly because the type of people who might support it have better things to do with their time than vote. And if they believe in voting, they tend to feel they are “wasting” their vote on someone who can’t win. But voting is itself another part of the problem.

None of the Above

At least 95% of incumbents in Congress typically retain office. That is a higher proportion than in the Su­preme Soviet of the defunct USSR, and a lower turnover rate than in Britain’s hereditary House of Lords where people lose their seats only by dying.

The political system in the United States has, like all systems which grow old and large, become moribund and corrupt.

The conventional wisdom holds a decline in voter turnout is a sign of apathy. But it may also be a sign of a renaissance in personal responsibility. It could be people saying, “I won’t be fooled again, and I won’t lend power to them.”

Politics has always been a way of redistributing wealth from those who produce to those who are politically favored. As H.L. Mencken observed, every election amounts to no more than an advance auction on stolen goods, a process few would support if they saw its true nature.

Protesters in the 1960s had their flaws, but they were quite correct when they said, “If you’re not part of the solution, you’re part of the problem.” If politics is the problem, what is the solution? I have an answer that may appeal to you.

The first step in solving the problem is to stop actively encouraging it.

Many Americans have intuitively recognized that government is the problem and have stopped voting. There are at least five reasons many people do not vote:

Some of these thoughts may impress you as vaguely “unpatriotic”; that is certainly not my intention. But, unfortunately, America isn’t the place it once was, either. The United States has evolved from the land of the free and the home of the brave to something more closely resembling the land of entitlements and the home of whining lawsuit filers.

The founding ideas of the country, which were highly libertarian, have been thoroughly distorted. What passes for tradition today is something against which the Founding Fathers would have led a second revolution.

This sorry, scary state of affairs is one reason some people emphasize the importance of joining the process, “working within the system” and “making your voice heard,” to ensure that “the bad guys” don’t get in. They seem to think that increasing the number of voters will improve the quality of their choices.

This argument compels many sincere people, who otherwise wouldn’t dream of coercing their neighbors, to take part in the political process. But it only feeds power to people in politics and government, validating their existence and making them more powerful in the process.

Of course, everybody involved gets something out of it, psychologically if not monetarily. Politics gives people a sense of belonging to something bigger than themselves and so has special appeal for those who cannot find satisfaction within themselves.

We cluck in amazement at the enthusiasm shown at Hitler’s giant rallies but figure what goes on here, today, is different. Well, it’s never quite the same. But the mindless sloganeering, the cult of the personality, and a certainty of the masses that “their” candidate will kiss their personal lives and make them better are identical.

And even if the favored candidate doesn’t help them, then at least he’ll keep others from getting too much. Politics is the institutionalization of envy, a vice which proclaims “You’ve got something I want, and if I can’t get one, I’ll take yours. And if I can’t have yours, I’ll destroy it so you can’t have it either.” Participating in politics is an act of ethical bankruptcy.

The key to getting “rubes” (i.e., voters) to vote and “marks” (i.e., contribu­tors) to give is to talk in generalities while sounding specific and looking sincere and thoughtful, yet decisive. Vapid, venal party hacks can be shaped, like Silly Putty, into salable candidates. People like to kid themselves that they are voting for either “the man” or “the ideas.” But few “ideas” are more than slogans artfully packaged to push the right buttons. Voting for “the man” doesn’t help much either since these guys are more diligently programmed, posed, and rehearsed than any actor.

This is probably more true today than it’s ever been since elections are now won on television, and television is not a forum for expressing complex ideas and philosophies. It lends itself to slogans and glib people who look and talk like game show hosts. People with really “new ideas” wouldn’t dream of introducing them to politics because they know ideas can’t be explained in 60 seconds.

I’m not intimating, incidentally, that people disinvolve themselves from their communities, social groups, or other voluntary organizations; just the opposite since those relationships are the lifeblood of society. But the political process, or government, is not synonymous with society or even complementary to it. Government is a dead hand on society.

So where does that leave us for the election coming up in a few days?

It’s likely to be the most important one in the country’s history, including that of 1860. Unfortunately, no matter how you vote, it’s unlikely to head off what history likely has in store for us. Something wicked this way comes.

Editor’s Note: The political trajectory is troubling. Unfortunately, there’s little any individual can practically do to change the course of these trends in motion.