International Man: In the past decade, the Fed’s money printing has created bubbles in stocks, bonds, real estate, and other many areas. It’s likely that the stimulus and money printing will not only continue but accelerate at breathtaking speeds in 2021.

What do you think the prospects are for what the great Austrian economist Ludwig von Mises called a “crack-up boom?”

Doug Casey: First of all, we have to define what Mises meant by a “crack-up boom.” It can occur when the public realizes that money is being printed at a great rate, and it’s likely to continue being printed at a great rate. The public then starts moving out of money to buy anything of real value. All that money is passed around faster and faster, like an old maid card, causing a “crack-up boom.” It’s not a real boom. It’s caused by fear, not prosperity. The desperation of trying to get into real goods and get out of the US dollar creates what you might call uneconomic economic activity.

They won’t try to put the money into productive enterprises, rather just tangible assets that will defend them from inflation. The most famous crack-up boom in modern history, of course, was in Weimar Germany during the early 1920s.

Are we heading in that direction in the US? Well, there are differences. For one, the US isn’t just coming out of a devastating war. That was an element why it got as bad as it did in Germany. On the other hand, the US government is much more profligate with many more programs than the German government after World War I. Of course, the US is losing it’s Forever Wars in an undisclosed—but large—number of countries.

Despite being so much bigger and with so much more real wealth, the US government’s current spending habits may make things even worse than for Germany after World War I and subsequent reparations in the 1920s. A chaotic crack-up boom is possible, and a significantly lower standard of living for the average American is a sure thing. Now is the time, the last minute as it were, to start planning for it. A few years ago would have been better.

International Man: On the other hand, what are the prospects for a deflationary collapse, at least initially, as one or more of these historical bubbles in the financial markets inevitably burst?

Doug Casey: This is an argument that students of Austrian economics have debated since at least the mid-1960s.

Is all this money printing going to result in runaway inflation, or will all the debt result in catastrophic deflation and collapse—or both in sequence? So far, the inflationists have been right because the Federal Reserve has always come to the rescue, printing enough money to prop up the house of cards built by previous inflation, but there’s no guarantee that they’ll succeed in the future.

Their failure to bail out Bear Stearns and Lehman Brothers during the collapse of 2008 almost brought the system down. This time they’ll be forced to bail out almost everybody. Ultimately, we’ll wind up with a worthless dollar, but along the way, there will be some serious deflation scares. If the Fed doesn’t bail out a major corporation or industry quickly enough, or to a great enough degree, things could get out of control.

They’re walking a tight rope above the Grand Canyon, but they’re economic stumblebums.

The economy is being run by a bunch of suits in the Eccles Building in Washington DC. They’re academics with no practical experience in the real economy.

International Man: The gap between GDP growth and the Fed’s balance sheet is widening to previously unthinkable levels. It’s an indication of just how much currency is being created relative to the underlying economy. What do you make of this, and where are things headed? 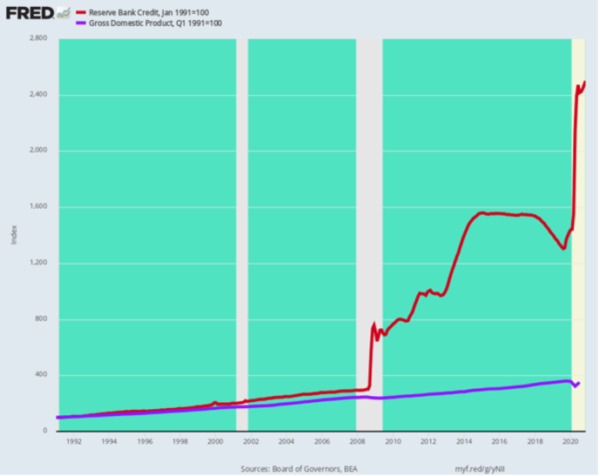 Doug Casey: Trends in motion tend to stay in motion until they reach a crisis—at which point, anything can happen. That’s where we are right now.

If the Fed were a poker player, I’d say it was on tilt—making desperate but foolish bets hoping to get out even. It’s hard to recover from that. They can’t stop printing money, or the whole rotten structure will come down. But if they keep printing money, there’s no telling where the next explosion of inflation will erupt. So far, it has been in the stock, bond, and real estate markets. I suspect that commodities will be the next area.

The more that government tries to fine-tune the economy—which, incidentally, is a phrase that they don’t use anymore, in recognition of the fact things are actually out of control—the more it will gyrate like an elevator with a lunatic at the controls. To get $1 of actual economic growth, they know that they have to print four, five, or six dollars of funny money.

We’re way beyond the silly notion of “fine-tuning” the economy at this point. Fine-tuning has given way to hitting the economy with a monkey wrench or a sledgehammer.

International Man: What do you think will happen with the US dollar over the next four years?

Doug Casey: The fact that they’re trying to go to a digital dollar is guaranteed to make it worse and to make the US dollar more of a hot potato than it has ever been.

It’s going to have huge international, as well as domestic, consequences. The dollar—not wheat, Boeings, or IBMs—has been the major US export for decades now. No one knows how many are held outside the US, but at some point, it will be replaced as the world’s currency. When that happens, they’ll start flooding back home, and domestic prices will explode. At the same time, real US wealth will be exported in exchange for those dollars. The domestic standard of living will fall dramatically.

The government’s response will likely be foreign exchange controls, which will just aggravate things. The US is looking more and more like Argentina.

International Man: Given everything we’ve just talked about, what can the average person do?

Doug Casey: Other than buying a lot of gold, silver, and the stocks of companies that mine them, now might be an excellent time to buy a house you like if you can do it with a 3% fixed-rate long-term mortgage.

Whether the house in question goes up in value or not, you can be pretty sure your mortgage is going to be inflated into insignificance. It’s an excellent financial bet, a great way to get short the dollar.

In fact, a friend just recently bought a hundred-thousand-dollar car, which costs more than some houses. He could have paid cash, but since they offered financing at 1.9% over six years, it was like a gift. Of course, he bought the car—the way many will buy things if the crack-up boom arrives. The depreciation on the loan will offset the depreciation on the car.

As a result of all this currency printing, you’re going to see more people becoming preppers as well—stocking up on food, shelter, and ammunition because of the government’s inflation as well as increasing regulations.

Assuming that Biden, or Harris, will be president, this administration is likely to stretch the actual fabric of society to the breaking point. Being a prepper is smart. And that would include transferring any significant cash holdings that you have into gold and/or silver. That’s what the average person can do.

If the average person wants to speculate, he can buy gold stocks, which are very cheap. I think they’re going to go into a bubble in the next few years. Gold stocks and small oil stocks are the two things that I like best.