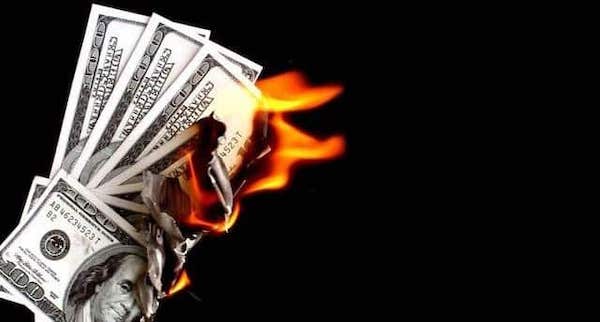 International Man: Let’s start with the basics. What exactly are negative interest rates? Could they exist in a free market without state intervention?

Doug Casey: Right now, over $17 trillion of bonds, and a lot of bank accounts—especially in Europe—are offering negative interest rates. It’s something that can only exist in Bizarro World, something that’s really a cosmic impossibility in a normal world. It’s especially true since almost all the world’s banks are zombies—bankrupt. Fractional reserve banking—which is only possible in a world where central banks control the money supply—is intrinsically unsound.

The economy is head over heels in debt; if things slow down—as they do now, due to the hysteria over The Virus—lots of loans will go into default. It won’t be because of The Virus itself, however. Coronavirus is just the pin that broke the bubble.

The whole financial world is in a bubble because of the trillions of currency units created since the crisis unfolded in 2008. Bonds are in a hyper bubble—the worst possible place to be. They’re a triple threat to capital—interest rate risk, currency risk, and default risk. And, again, at negative rates, they are truly a return-free risk.

Negative interest rates are being enforced by governments and central banks for several reasons.

First of all, governments are so head over heels in debt that they can’t afford to pay actual market-based interest rates.

If the US government, for instance, was paying even 6%, historically a more or less normal interest rate, on its $23 trillion of debt, that would be about $1.5 trillion a year in interest. That, just by itself, would more than double the current annual deficit.

That’s one reason governments like negative interest rates: it disguises their bankruptcy. They live on borrowed money. Tax revenues are nowhere near adequate to fund their spending—not to mention that spending is going to skyrocket while their revenues plunge for the foreseeable future.

Another reason governments like negative interest rates is that they encourage people to consume as opposed to save, which is also bizarro-world stupid. The only way you grow wealth is by producing more than you consume and saving the difference. The problem is that in today’s world the way to save is in currency in a bank account. If the currency loses value simultaneously with negative interest rates reducing the number of units, savings will drop.

If you’re penalized for saving, you’re going to do less of it. You’re going to go out and spend the money now on a bigger house, a new car, or perhaps a wild party. This is one reason why Third World countries never progress on their own. Their currencies are unstable, worthless, and not worth the trouble of people saving them. So, they never develop a capital base. It’s why poor people with bad habits stay poor.

From every economic point of view, negative interest rates are pure destruction. They make everything worse for prudent savers and better for profligate borrowers. But printing money and lowering rates are the only things that central banks can do to ward off a deflationary collapse. Their actions will only deepen and lengthen the Greater Depression.

International Man: Exactly. By using the force of government to create the conditions for negative interest rates, central banks are giving the signal that the cost of money is less than nothing. They are really stealing the prosperity of the future.

Doug Casey: That’s right. People have to realize that the government does not represent “we the people”. The government is a discrete entity, as separate from society as General Motors, General Electric, or Google. They have their own interests. There’s no “us” benefitting from all this.

Government is a parasite; it’s not your friend. It’s a dead hand on society; propaganda has made people think it’s necessary. Many people love the government, however, because it gives them free stuff that’s taken from some and given to certain voters.

Doug Casey: Anything is possible because the US government has its back up against the wall. Worse, the people themselves think government is a magic cornucopia. They all want it to “do something”.

And they’re capable of doing absolutely anything. Why? The people employed by the US government and the Fed actually believe the Keynesian claptrap. It’s a secular religion to them.

Plus, Trump himself is truly an economic ignoramus. Now, as I say that, let me hasten to add that the good thing about Trump is he’s a cultural conservative; that’s why he gets a tremendous amount of support from the red counties. I think that that’s fine, but from an economic point of view, he’s dangerous. He’s an authoritarian with a touch of megalomania, and he’s capable of anything.

Anything’s possible in this country at this point. Not least because Boobus americanus seems to want “strong leadership”.

International Man: Since negative interest rates can only exist from state intervention, they are just a euphemism for a tax on savings. What impact do you believe they will have on the economy as they discourage savings and capital formation?

Doug Casey: The longer it goes on, the sooner the countries that have negative interest rates are going to start looking like Third World countries. One of the reasons Third World countries are backward is that they don’t have any domestic capital. Why not? Because there aren’t domestic savings. And it takes capital to build things.

Governments are actually destroying the foundations of society with their current policies. It will take a while to happen in the West, because of the tremendous amount of capital that’s been accumulated and saved up over hundreds of years. But sure, they can absolutely destroy it. The Romans did it 2,000 years ago. The Venezuelans and Argentines are showing how to do it today.

If I borrowed $1 million tomorrow morning, I could have a wonderful party for the next year. My standard of living would be artificially higher for a while. But when the time comes to pay it back, it’s going to be genuinely lower, and for a long time.

That’s exactly what the West is doing right now, living out of saved capital and mortgaging its future. That’s what negative interest rates encourage.

Doug Casey: Well, it would be stupid. When I use that word, incidentally, I mean “showing an unwitting tendency to self-destruction”. A pity, but it could happen.

Artificially low interest rates—or perhaps negative interest rates—drive people out of cash and liquidity and into speculating in the financial markets. It can affect the average person positively for a while, maybe artificially doubling the size of his retirement nest egg. That is, until the bubble bursts, and he loses a very real 90%. It’s a disaster.

There are absolutely no good consequences to manipulating interest rates in either direction.

Money is the lifeblood of the economy, and interest rates are the price of money. It practically guarantees that the Greater Depression is going to be worse than even I thought it would be.

International Man: Do you think it’s possible that people will pay to have their money in a bank account?

Doug Casey: Well, if we had a sound banking system—which we don’t because it’s a fractional reserve system—there would be two very separate and distinct kinds of bank accounts. They’re separate businesses, actually.

Let’s say they give you 3%, and they lend it for 6%, capture the 3% spread as their profit, risk reserves, and so forth. That’s the way a time deposit bank account should work. And that’s how it worked before central banking and fractional reserves.

Historically, you paid the bank money for a demand type deposit, and you got a return—with some risk—on a time deposit. But those distinctions have been totally lost. Banks now lend out demand deposits. It’s equivalent to Allied Van and storage lending out your furniture.

International Man: How does the growth of negative interest rates coincide with the trend towards eliminating cash?

Doug Casey: They dovetail perfectly. They go hand-in-glove with each other.

Countries all around the world are moving towards eliminating cash. For example, in Sweden, it’s very hard to get cash. In China, it’s very hard to get cash. Everybody transfers funds electronically, without any form of physical money. All money is in digital bank accounts. A negative interest rate of, let’s say, 1% means that you’re really being taxed 1% in addition to everything else.

It’s even worse than that, though, because when cash vanishes, you have zero privacy. Everything has to go through your bank account. They know precisely what you’re buying, what you’re selling, from whom, what you own—unless you’re going to barter, the way things were done in prehistoric times.

It‘s a catastrophe from the point of view of personal freedom, and another reason why everybody should have a significant store of gold coins, preferably small ones, a quarter ounce or less. And silver coins, too. Silver is a great bargain right now, at a roughly 120:1 ratio with gold.

If they eliminate cash and we go to an entirely digital currency, they‘re in total control of you, because you won‘t be able to do anything, go anywhere, or buy anything without the direct or indirect approval of the authorities.

International Man: What can people do to protect themselves?

Doug Casey: There are two things you can do at this point.

One, you should buy precious metals, in your own possession, or stored securely in some offshore location, so that you‘re diversified politically and geographically as well.

Second, now is an excellent time to speculate in gold stocks. With gold in the $1,600 area, every active gold mine in the world is coining money. In fact, their margins are increasing with the collapse of oil prices, since fuel is a major cost, on the order of 20% for most mines.

And at some point soon, fund managers who now don‘t even know that gold or gold stocks exist, are going to pile in to gold stocks.

There are so few of them, and the market caps are so small, that it‘s going to be like trying to funnel the contents of Hoover Dam through a garden hose. Mining is a crappy business, but right now, it’s super speculation.

There are no guarantees, but it‘s as good a speculation as I can think of right now.

Those are the two things that you should own. And they both revolve around gold.