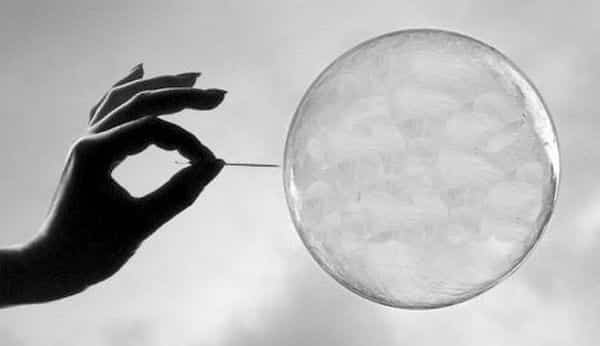 International Man: The bond super bubble continues to get bigger. Interest rates seem to be headed even lower from here. Is this the blow-off top in the bond market?

What do you think will cause central banks to lose control and for interest rates to head higher?

Doug Casey: Even with the Fed bailing out major institutions—which it will continue to do, just like back in 2008–2009—the fundamentals underlying many businesses are so bad that a lot of them are going to collapse. I’m not just talking about the obvious candidates—retail, restaurants, airlines—but across the board.

As that starts happening, people will realize that the cat’s really out of the bag, that this isn’t just another cyclical downturn—it’s genuine depression. And almost everything the government is doing is not only the wrong thing but the exact opposite of the right thing.

The worst possible place for money today may not even be the stock market, as dangerous as it is. It’s the bond market. Bonds aren’t just in a bubble. They’re in a hyper-bubble.

The bond hyper-bubble is serious because there’s so much debt in the world at such low interest rates. When reality reasserts itself, interest rates start heading up—not just to levels that show a real yield after inflation but levels from the early ’80s, which ranged from 10% to 20%. The bond market is heading toward its long-overdue collapse.

It will take down pension funds and insurance companies with it as well as the property market, which is built on a mountain of debt. It’s going to be really ugly. Most of their assets are in bonds. And many pension funds—particularly those for public employees—are already severely underfunded.

That’s really serious because we’re not at the bottom of a stock or bond bear market, where insolvency would be understandable. We’re at the top of bubbles in both, and things are as good as they could possibly get. As a consequence, a lot of cities and states are either going to have to increase contributions a lot or cut retirement benefits a lot.

Regarding bonds themselves, as an investment class, they’re nothing like what they used to be. Bonds are now a triple threat to your wealth—currency risk, interest rate risk, and solvency risk.

In the long run, currency risk is the most certain and perhaps the deadliest. Despite the current demand for dollars—debtors are desperate for dollars to service and roll over their debts—the dollar will reach its intrinsic value. The US Government, as the world’s biggest debtor, is most in need of dollars; but can get all it wants by selling its debt to its central bank, the Federal Reserve.

Why make a bet on the value of the dollar?

Second is interest rate risk. Interest rates are at all-time lows, substantially below the rate of inflation everywhere, and actually negative on about $17 trillion of European and Japanese government debt. I used to think interest rates below zero were metaphysically impossible but forgot that we’re now living in Bizarro World.

Artificially low rates are highly destructive. Low rates encourage people to do things that they ordinarily wouldn’t dream of because they think they can afford it. That’s because of massive misallocations of capital and malinvestment. The government needs low rates since interest on $20-some trillion is a major cost.

Low rates also discourage people from saving. They make normally sensible folk act like foolish grasshoppers. Instead of setting aside wealth for the winter, like wise ants, it encourages them to consume today and even live out of capital by borrowing. When winter comes, grasshoppers starve. You know the old fable.

The third threat is solvency risk. With all the debt in the world, a lot of people just aren’t going to be able to pay their debts. This includes governments.

International Man: The global pandemic seems to have changed the value proposition for many to live in big cities. What do you think the effect of this hysteria will be on the real estate market?

Doug Casey: This is one of the second-order effects of the hysteria that I’ve previously discussed. The recent rent protests are going to roll over into a third-order effect. The government will say, “It’s okay. You don’t have to pay your rent or mortgage because we can’t have 20 million more families living under bridges. We’ll pay it for you.” The same goes for utilities. This is something a lot of politicians are talking about right now.

That said, there’s an increasing tendency to get out of the big city and move to small towns, or maybe the countryside. Not the suburbs, though. The burbs of cities are the worst of both worlds in some ways.

Taxes are a huge consideration when it comes to real estate. With unemployment as high as it is right now—and it’s going to stay high—every kind of tax revenue is collapsing. Meanwhile, their expenses are exploding with unemployment and related benefits.

Unfortunately, government employees aren’t being fired or laid off at anywhere near the rate of the private sector. The government always takes care of its own, of course.

Pelosi is trying to get a near trillion-dollar bill through Congress to bail out state and local governments. We can only hope it doesn’t pass, so they’ll be forced to trim their bloated employee rolls. If that happens, however, they’ll cut back on desirable and essential services first, so the people will feel it, and scream for Federal funds.

It’s a bad idea to stay in the city or the suburbs. I’ve said that for years, but the current epidemic of riots underlines that. As does the trend of working at home and doing business electronically. It’s smarter to be in a small town, which has some cohesiveness, or in the countryside. Amazon and Walmart, FedEx and UPS have made it quite possible and convenient to live anywhere now. You no longer have to live in the city to take advantage of most of the things that cities provide. Cities, at least in the US, are all in decline anyway. They’re crowded, noisy, dirty, expensive, and dangerous.

It’s unfortunate in many ways, though. The disappearance of cities was one major indicator of the decline of the Western Roman Empire in the 3rd through 6th centuries. But that gets us into a gloomy conversation about the collapse of Western Civilization itself. Right now, we’re just talking about nearby financial and economic problems.

The real estate bubble has primarily been in major cities like New York, LA, and San Francisco, and their equivalents around the world. In Vancouver—which was an ultra-hot market—transactions now are happening at 40–50% discounts from the peak. Property prices in fashionable big cities are a bubble that’s bursting as we speak.

International Man: Many retirees and savers hold large positions in risky stocks and junk bonds in a search for yield. What do you say to these people?

Doug Casey: First of all, the average guy generally gets killed in the markets. Even in a bull market, he only gets the table scraps, the poorest and worst of everything.

Right now, the public thinks everything will be just fine. It’s not. In a depression, yields that are both high and safe are like unicorns or hen’s teeth. Oh, and speaking of unicorns, the public is looking, en masse, for the next Facebook, Amazon, or Apple.

They’re spending ridiculous amounts of money on highly promoted newsletters and all kinds of scams. I don’t doubt infomercials pushing magic trading programs are going to show up on late-night TV next. Tech stocks for people who know nothing about technology and trading services for people who know nothing about the markets. It’s perverse. But the public often thinks the party is still on—they’ve heard about 8,357% and 10,523% returns—and pile in like lemmings.

John Q Public doesn’t realize that he’s going to get eaten up by bid-ask spreads. He doesn’t realize that he’s going to get killed by the commissions on both sides. Even if the person he’s taking advice from is right, the average guy gets and acts on the information too late. Lastly, he doesn’t have the psychology that it takes to be a trader, a speculator, or even an investor. These are all different things, incidentally. What the latecomers are is gamblers—but they don’t know it.

That is what people are doing in a desperate attempt to outrun the collapse—and they’re making their situation worse.

Trying to trade is one thing. The other is buying all kinds of tech stocks, which always happens late in the game. People often pile into tech stocks after the bubble has broken, but they don’t know that it has burst.

The old expression “high-tech, big wreck” is going to become very obvious in the future. Most tech companies have to constantly raise lots and lots of money. They’re science projects. Most of them are burning matches—very much like mining exploration stocks. How many are going to be the next Amazon or Facebook? Most of them are going to wind up trading for about zero.

What do I say to these people?

Please don’t do it. You’re just going to lose the rest of your money.

International Man: What speculative opportunities do you see in this environment?

Doug Casey: Unfortunately, the main opportunities are speculative. All the phony money being created will create other bubbles.

The question is, where will those bubbles be? They’re not easy to identify.

My guess is that the next bubble is going to be driven by both fear and greed as well as prudence into gold and, to a lesser degree, into silver. And, for different reasons, into commodities as a group.

That’s where I would look.

Gold is no longer at giveaway prices like it was in 2001, at $250. It’s been an excellent place to be for a long time. But it’s going a lot higher.

There are about 2,000 gold mining stocks. Or, at least, companies that claim to be gold mining, gold development, or gold exploration stocks. These are three different things. That distinction should be made.

Some of them are still very depressed right now.

Gold mining—which is generally a risky, crappy business—is one of the few profitable businesses out there.

Of mining companies in production today, most have “all-in sustaining costs” of about $1,000 an ounce, but gold is trading at $1,700.

Fund managers—most of whom, like Buffet and Munger, neither like nor understand gold—are going to start piling into these things. So will the public, but much later.

I think this is a rare opportunity. This is going to be the next bubble.

Forget about common stocks, bonds, and real estate. There’s plenty of time for conventional investments after the economy bottoms.