Do This Before Politicians Make You Pay Your “Fair Share” 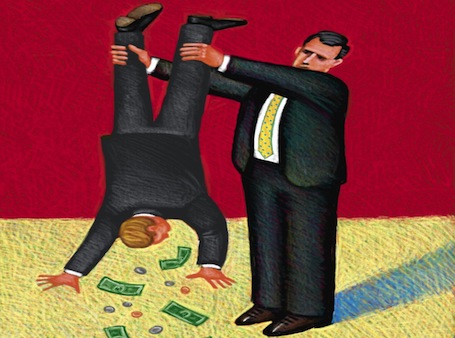 Bloated governments around the world are faced with worsening fiscal conditions. Strapped for cash, they continue to squeeze every drop of wealth that’s within their reach through money printing and higher taxes. Today, we ask Jeff Thomas to weigh in on how to ensure you don’t become collateral damage in the next crisis.

International Man: We see this trend playing out around the world in the US, across Europe and in third world countries. Desperate governments are always in need of more capital. What does that mean for people who earn money and want to keep it?

Jeff Thomas: The most direct answer is that, if they’re going to survive the situation with their skin on, they’re going to have to rethink the way they hold on to wealth. But more broadly, they’re going to need to understand that the crisis that’s headed their way is not going to look the same as the mini-crashes that occurred in 2000 and 2008. This one is going to be far more devastating for some jurisdictions such as the EU, US and Canada. In those jurisdictions, this will be an endgame situation.

Historically, whenever this occurs, the big players – governments included – tend to scrape all the chips off the table, ignoring any previous rules of the game. At such a time, no government, no banking institution, no investment fund is to be trusted.

This will mean that any monetary exposure the individual has with regard to these entities, should be regarded as sacrificial. By this, I mean that any exposed wealth is not necessarily certain to be lost entirely, but it’s quite possible. So any wealth that’s subject to the control of these institutions should be assumed to be wealth that may, suddenly and without warning, be confiscated or otherwise lost.

The greatest difficulty in this is that traditional investments and stores of wealth may no longer be viable, and the individual will have to prepare for this eventuality now, before this occurs.

International Man: To a large extent, everyone is forced to use and earn in US dollars, euros, pesos, etc. These are all paper currencies that are centrally controlled by governments looking to spend more and finance it with the printing press. How do people get what they earn outside of that system?

Jeff Thomas: The answer to this comes in two parts. If the individual only does one, he may still lose everything he’s got. He has to do both if he’s to protect himself. The first part is that, if he lives in one of the endangered jurisdictions, he’ll need to expatriate his wealth to a safer location – a jurisdiction that’s less likely to head south in a crisis. In any crisis, there are always some jurisdictions that remain stable.

These jurisdictions actually thrive in a crisis, as the money flows to them rapidly. There’s an old saying that says, “Money tends to go where it’s treated best,” and that’s especially true in a crisis. So, whilst some jurisdictions will be in crisis, others will actually prosper – and therefore be safer – than they were before.

The second part is that, once you’ve liquidated all of your holdings that you can, at home, and have successfully expatriated the proceeds to a safer location, you want to get them into a form that’s as safe as possible. Unfortunately, in a crash, banks worldwide are likely to close without warning.

In some jurisdictions, they’ll re-open once they’re assured that there will be no run on the banks, but in the interim, your access to your wealth may be frozen. In an overseas bank, this is better than losing it entirely, as you might have, back home, but it does limit your options for an indeterminate period.

Therefore, once your wealth is expatriated, you’ll want to convert much of it out of cash. Real estate is an excellent choice in an overseas jurisdiction, as your home government cannot confiscate it. For one country to take land in another country is an act of war.

The other choice is to buy precious metals and store them in the best facility you can, in the safest jurisdiction you can. In a crisis, the value of precious metals always rises, as does the demand for them. In such a facility it’s also possible to store cash. Unlike a bank, a storage facility doesn’t have the right to confiscate your wealth or to refuse you the right to withdraw it. That means that, as monetary events unfold, you retain the ability to control your wealth.

International Man: In an effort to end America’s Great Depression, President Roosevelt made gold ownership illegal in 1933 – forcing people to turn in their gold in exchange for paper money. How do hard assets like gold, other precious metals and real estate stack up against any future attempts by a government to confiscate or tax it?

Jeff Thomas: In any crisis, there are no guarantees. The best you can do is avoid being the low-hanging fruit. If you live in, say, New York, and all your real estate ownership is in the US and all your cash is in New York banks, you’re as exposed as you can get. The objective is to make it as difficult to take your wealth as possible. If all your wealth is in another country (or countries), your home country has to deal with another country’s laws and go through their courts in order to take what’s yours. Your objective is to make your wealth so difficult to go after that you’re too much trouble to bother with.

I should mention that this approach is working well, as we speak, for those who are employing it. However, it may become essential in a crisis.

International Man: What should people consider in their decision to move their wealth and assets outside the control of unfavorable governments?

Jeff Thomas: First, be aware that time is limited. We may have a year or two before it’s necessary, but a market crash could happen at any time. It’s always better to be a year too early than a day too late. Second, I always advise people to select the safest jurisdiction they can find that’s not too far to get to, if an emergency were to occur. For example, Singapore is an excellent choice, but for North Americans, it’s halfway round the world.

Once you’ve selected your best option for an accessible jurisdiction, seek out a storage facility within that jurisdiction that’s not also a banking institution. The OECD, FATCA, etc., are in a great position to blackmail banks, but they can’t do the same to non-banking institutions. That’s one more layer of protection for you.

International Man: What do you look for in a place that might be safe for your money?

Jeff Thomas: I begin with those countries that have no direct taxation of any kind – no income tax, property tax, sales tax, capital gains tax, inheritance tax, etc. (Remember – it’s much harder for any government to create a new form of taxation than to simply raise an existing tax). Also, as regards precious metals ownership, look for an absence of taxes or duties that apply to the purchase, ownership, storage or sale of precious metals. This ensures not only an absence of taxes; it also ensures an absence of governmental interference in what you do with your wealth. You can act quickly if you need to without having red tape tie you up.

Second, you’d want a jurisdiction whose government has a consistent history for economic stability that caters to international investors. This is critical. It means that if that country’s economy is dependent upon foreign investment, the political leaders can’t change the rules on you without destroying their own careers. You want them to need you to do well, so that they can remain in their jobs. That’s your insurance policy when times are hard and political temptations are great.

Finally, if you’re able to do so, financially, you’d want to have a bolt hole – a property in a jurisdiction that’s either going to be minimally affected by the coming crisis or will be positively affected. That’s something you’d need to create in advance, as, if conditions turned sour in your home country, you’d want to have your Alamo ready for you. You’d just pack a carry-on and go to the airport, knowing your destination was waiting for you. Making your wealth safe in a crisis won’t help much if you can’t get to it and get your family safe.

I’m not predicting an “end-of-the-world” scenario here, but it would be wise to anticipate significant unrest that may be brief or periodic. Ideally, you’d want to sit that out someplace safer.

New York Times best-selling author Doug Casey and his team just released a free guide that will show you exactly how. Click here to download the PDF now.