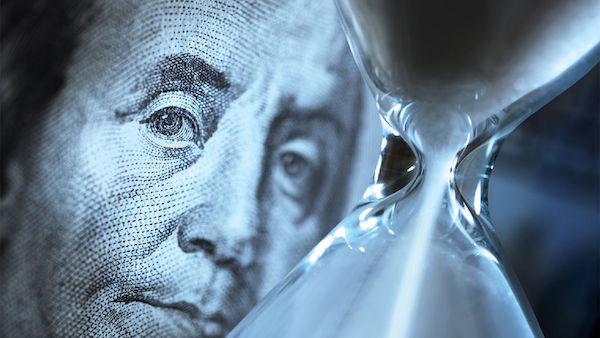 Known as the “Father of Reaganomics,” David Stockman served as President Ronald Reagan’s budget director and was a principal architect of his original effort to Make America Great Again.

In David’s newest book Dump Trump: Why Conservatives Should Punt on November 3rd, he asserts that Trump’s disastrous lockdown and massive government spending, borrowing, and money printing has left conservatives with no choice but to not re-elect him. Click here to get your copy now.

International Man: During his time as president, Trump has proven that he can push the Fed to keep interest rates at near-zero and print money at astronomical levels.

Have Trump and the Republicans set a new precedent, in which the Fed will bend to the will of Washington DC?

David Stockman: A few weeks back, one of the greatest anomalies of financial history quietly passed into the history books. I’m are referring to the fact that the yield on the 10-year US Treasury (UST) fell to an all-time low of 0.52%, prompting Deutsche Bank’s chief credit strategist to marvel out loud:

……the current nadir in the 10-year yield went back 234 years… The U.S. has been through depressions, deflations, wars, restrictive gold standard regimes, market crashes and many other major events, and never before have we seen yields so low.

There you have the essence of Donald Trump’s malefic legacy. He brow-beat the Fed into abject submission on interest rates, even as he opened the spending and borrowing spigots like never before.

That fraught combo is nothing less than a freak of financial nature. It is a temporary and incendiary condition spawned by the willful stupidity of Washington policymakers who should know better, but who, apparently, are enthrall to the crack-pot economics of Donald J. Trump.

This is what passes for fiscal policy in the Imperial City today. And it also tells you why the self-proclaimed “King of Debt” currently in the Oval Office will long be known as the father of America’s fiscal demise.

In your perspective, will we be seeing any change in the way this COVID hysteria is being handled depending on whether Trump or Biden wins?

David Stockman: The Donald’s mishandling of the COVID-19 pandemic was so colossal and fatal that it alone disqualifies him for a second term.

In launching the quarantines and stay-at-home orders last March and empowering a rogue task force of government doctors, career apparatchiks, and power-seeking swamp creatures to trample on the people’s livelihoods and liberties, Donald Trump committed one of the most fatal errors of any modern president.

He cannot be let off the hook on the grounds that he received bad advice. On the contrary, an actual conservative—or even Republican—president would have stoutly resisted the overnight lurch into the inherently unconstitutional and destructive regime of economic martial law that enveloped the nation within days.

Moreover, at the time and since then, there were never any medical facts or “science” that warranted what amounted to the most vicious assault on the domestic economy ever carried out by the agencies of government. That is, the Donald coveted the power and glory of the big job in the Oval Office, and in the hour of decision, he broke the American economy like never before.

Now he owns the breakage.

International Man: Trump has campaigned on the idea that he is responsible for creating “the greatest economy ever.” There are tens of millions of unemployed Americans, much business activity is still halted or functioning at a snail’s pace, and there is talking of more bailouts.

What’s your take on this?

David Stockman: The Donald has not remotely created the greatest economy ever. The US was a debt- and speculation-entombed economy when he took the oath of office, and he only made it far worse—even before the coronavirus lockdowns sent it reeling.

But suffice it, here, to note that based on the lingua franca of economics—real GDP growth—the Donald’s score for his first 13 quarters in office, and before the COVID-19 lockdown tanked the economy in Q2 2020, was dead last among every president since 1948.

But the larger point is that Trump’s wholehearted embrace of sheer fiscal and monetary madness has not only left the nation spiraling toward the Mother of all Financial Disasters, but he has also finally euthanized what remained of GOP fiscal rectitude. And without even a semblance of two-party competition on the fundamental matter of financial discipline in a 21st century interest group and PAC-driven Welfare State democracy, there is no apparent political route to restoring sustainable public finances.

To hear the Donald boast, first, he created the greatest economy in the history of the world; then, he shut it down to save 2.2 million lives; now, it’s rocketing back upward in a powerful “V,” and soon America will be greater than ever before.

Needless to say, the Donald is bombastic, innumerate, economically illiterate and capable of picking pepper out of fly shit when it comes to looking for an utterly misleading number.

But since the allegedly powerhouse pre-COVID economy is his strongest claim to a second term, it is imperative that the preposterous content of the Donald’s delusional narrative be understood. It makes it clear that the “Greatest Economy Ever” slogan is bogus through and through.

Of course, there is one tiny element of truth to it: As measured at Q1 2020, before Lockdown Nation plunged the US economy into recession during Q2, real GDP at $19.254 trillion was indeed a US record.

Alas, so was the final quarter GDP level of every president since Harry S. Truman.

International Man: It’s clear that Wall Street is demonstrating a completely different reality than what is taking place on Main Street.

Has Trump proven that as long as the stock market is up, it doesn’t matter what’s really happening on Main Street?

David Stockman: Clubbing interest rates to the flat line in a $20 trillion GDP freighted down with $81 trillion of public and private debts does absolutely nothing for Main Street or the real economy. That’s because Peak Debt and rampant speculation have essentially clogged the traditional credit channel of monetary policy transmission to Main Street, whereby it was held historically that increased housing and business investment would ensue.

No longer. The Fed’s cheap credit never really leaves the canyons of Wall Street, where it fulsomely rewards carry-traders and risk asset speculators because zero cost money is always and everywhere the mother’s milk of leveraged speculation. And it also causes corporate C-suites to become maniacally obsessed with goosing their stock options via financial engineering maneuvers such as stock buybacks and M&A deals, which supplant equity and financial resilience with debt and financial fragility.

So when business bankruptcies soar to unprecedented levels in the month ahead as the economy reels from the folly of Lockdown Nation, the financial fragility part will become crystal clear.

But it also needs to be recalled that even as the interest rate clubbers at the Fed fostered a massive explosion of business debt after the 2008 financial crisis, it did not translate into any growth in productive investment at all.

In other words, contrary to Wall Street ballyhoo about “strong” business investment, the US economy was essentially eating its own tail as it consumed existing business assets in annual production at a faster pace than it replaced them with new investments.

International Man: If Biden and Harris win the election, will the country be any better off for it?

David Stockman: Should the Dems prevail on November 3, Sleepy Joe will function as the on-call teleprompter-reading pastor of Woke World, while Kamala cracks a leftish whip as head of the Harris Regency government and the defrocked Clintonistas and progressive-left Jacobins clamber aboard the machinery of state throughout the Imperial City.

Call it the attempted restoration of a ruling class that has virtually gutted American prosperity and democratic function alike during the last 3-4 decades. Yet it now has the gall to claim that the present fractionated state of the union is owing solely to the Donald’s obnoxiously pugnacious self-aggrandizement and his purported dog whistles to the racist, red-necked, un-woke flotsam and jetsam of Flyover America.

I think not. The sharp clash between the stentorian politics of the bi-coastal elites and the populist uprising in Flyover America that brought the toxic persona of Donald Trump to the Oval Office is rooted in economics, not racism or the cultural backwardness and benighted sensibilities of America’s town and country yokels.

Moreover, these economic roots well pre-dated the Donald’s fateful trip down the escalator at Trump Tower in June 2015.

As to the matter of whether the Dems understand this or have a policy to ameliorate the underlying conditions: Fuggetaboutit!

The chance that the Dems will tell the Fed to stop manufacturing windfall gains for the 1% and 10% who mostly vote Republican and desist in savaging workers in competitively impacted global markets is somewhere between zero and none.

Indeed, if elected, the Dems may attempt to take away the working class’ private health insurance, guns, cheap fossil fuels for their homes and cars and, with the coronavirus loose in the land, their ability to meander in the malls and tie one on in the bars and sports stadiums. But what they won’t sideline is the unelected monetary politburo that is poisoning capitalist prosperity and political comity alike in America today.

What they also will not address, even as they go about destroying still more jobs with the $15 minimum wage, punitive taxes on job creators, and economy-wrecking lockdowns and mask-ups, is the elephant in the room—the destructive impact of three of government’s most wrong-head creations—welfare, the war on drugs, and public-school monopolies—on black family life, socialization, and economic mobility.