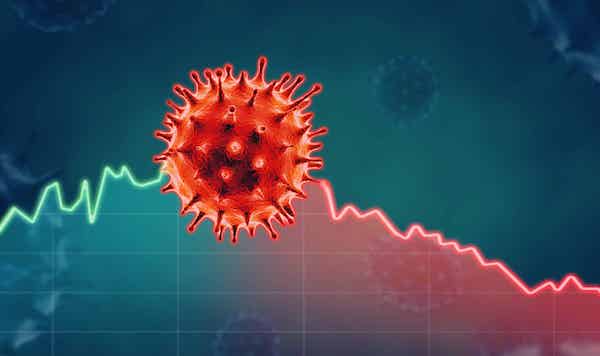 International Man: Is the government’s reaction to COVID-19 worse than the virus itself? What are your thoughts?

David Stockman: I think for once, Donald Trump was right when he worried out loud the other day that the cure may be far worse than the disease.

It is hitting, like a ton of bricks, a highly fragile and vulnerable economy that was living hand to mouth anyway because of the kind of highly counterproductive monetary and fiscal policies and debt build-up we’ve had over the last 30 years.

If you look at the data for New York—which is the epicenter of the whole COVID-19 pandemic—it is abundantly clear that COVID is not some kind of latter-day Black Death plague that takes down the young, the old, the healthy, the sick, and everyone in between.

It is a kind of super winter flu that strikes fatally, almost entirely, the elderly population that is already afflicted with many life-threatening medical conditions—or what the technicians call comorbidities.

The shutdown, which I call the “plenary lockdown policy,” is wrong. Closing all the businesses except a tiny, arbitrary set of essential operations is courting disaster for no good reason.

Here’s what the New York data showed us recently.

New York is ground zero and the epicenter. But if you look at the breakdown of that number by age and by medical condition, it’s startling.

You would not, in the slightest, in any kind of sane world, shut down an entire economy and lock down everything when you have a 5 per 100,000 death rate for the overwhelming share of the population.

The virus is not a fatal problem for the overwhelming share of the population.

Lots of people get infected. Most are asymptomatic. Some get sick and stay in bed for a couple of days, and they recover. A tiny fraction of the under-50-years population gets seriously ill and is hospitalized for treatment, and an infinitesimal number end up as fatalities. That’s the case for the healthy population under 50.

The strategy shouldn’t be a plenary lockdown. The right approach is to trace, identify, isolate, support, and treat the vulnerable population that already has many illnesses.

If we look at New York again, of those deaths among the elderly population, 60% had hypertension or high blood pressure, 31% had diabetes, etc. All of them, almost overwhelmingly, had one, two, or three comorbidities.

We don’t need Governor Cuomo to shut down the state. We need Governor Cuomo to tell the health department to mobilize the doctors and the healthcare apparatus of New York to identify the vulnerable elderly population. This population is already being treated in many cases for serious respiratory problems, heart ailments, and other diseases—and we are making sure that they’re as isolated and protected from this bad winter flu as they possibly can be.

It’s not merely a matter of degree. It’s that they’ve got it ass-backward.

You don’t lock down the population. You target the sub-population, the small minority of very vulnerable people, and do everything you can to shield them from this virus until it passes into the summer temperatures and the normal herd immunity that eventually will make it go away.

International Man: Those are excellent points. That’s not to mention that in the US, two out of three Americans are overweight or obese and have a pre-chronic or chronic condition. And of those people, the risk goes up substantially for those who have two or more conditions. It puts them at higher risk for something like COVID-19 to take them down.

David Stockman: I think that’s true, but even if you look at the New York data, again, it’s startling.

For the under-50-year-old population, I can’t emphasize it enough—it’s 5 per 100,000. That’s a rounding error in the scheme of things.

So, I think you’re hitting it right on the head.

What we need to think about is how much longer—and we’re not talking about months and quarters, we’re talking about days and weeks—we can possibly stand a shutdown that has already put 22 million people on unemployment claims in four weeks.

Let’s compare this to the worst four weeks of the Great Recession, which is the worst economic calamity that we’ve had since the Great Depression.

During the worst three-week period in the winter of 2008/2009, the cumulative new unemployment claims were 2.7 million, not 22 million. So, this is eight times worse.

We might add that it’s going to be 30 million, or close to that, very soon.

We have an economy that’s in free fall, unlike anything we’ve ever seen before, and we have a government that’s in total hysteria, trying to compensate for the economic collapse that is being ordered by the government itself.

What I’m talking about is the Everything Bailout that was signed without a record vote in the house, with no hearings—$2.2 trillion, on top of two or three other bills that had passed earlier. There’s another trillion that they’re talking about in the pipeline as a sort of a replenishment bill.

Even beyond that, then they’re talking about a stimulus and infrastructure bill, where the bidding starts at $2 billion. It is insanity.

Let’s just look at what’s happening in the here and now.

Where is it taking us?

This year alone—and these are not my numbers; they come from the most credible Washington DC agency, which I’m a part of, The Committee for a Responsible Federal Budget. That’s kind of an oxymoron, but it exists.

They had projected that during the fiscal year underway—which was half over before the whole COVID lockdown even got started—that the deficit is going to total $3.8 trillion.

It’s a deficit in the same order of magnitude as we had during the darkest days of World War II. During that time, the whole economy was producing military material and weapons, and nobody could spend any money on anything except necessities because everything else was rationed or wasn’t being produced. So they bought a lot of government war bonds.

So where we are right now, suddenly, overnight, is in a disastrous fiscal situation.

This self-inflicted shock has transformed the Trump-Republican trillion dollar per year deficits at the top of the business cycle.

It has transformed a terrible situation into a catastrophic situation, where they’re going to borrow $3.8 trillion this year alone. The number for fiscal 2021—which starts in October—is going to be another $2.5 trillion at minimum, or probably more.

Now the reason I bring this up is because we’re looking at a two-year period in which the combined deficits are likely to exceed $6 trillion in two years. These numbers are so humongous that they’re almost impossible for ordinary people—or even people who study this subject regularly—to grasp.

I think the best way to look at it is to see that $6 trillion of new debt in two years is equivalent to what it took 213 years and 43 presidents to produce—that’s how long it took to get to the first $6 trillion of public debt.

That’s how bad this has gotten, and it will destroy any remaining semblance of market capitalism we have in this country.

When you have a coast-to-coast soup line, with the government underwriting 100% of what everybody was getting in January 2020 by merely piling it onto the public debt, and then having the Fed printing money to fund it, you’re asking for a calamity—a financial and economic disaster of biblical proportions.

Editor’s Note: The ripple effects of the government lock down are only stating to take shape. That’s not to mention the unprecedented amount of money the that is being pumped into every corner of the economy by the Federal Reserve.

That’s precisely why NY Times best-selling author Doug Casey and his team just released an urgent video. It reveals how it will all play out and what you can do about it. Click here to watch it now.