David Stockman on the Mother of All Stock Market Manias

In a world faced by COVID lockdowns, staggering amounts of debt, central bank money-pumping extremes, and outright fiscal insanity in Washington, why is the present moment more propitious for the valuation of corporate earnings than during 99.9% of the time since the Korean War?

Of course, it is not. Not remotely so.

Instead, the Fed and the other central banks have led the robo-machines, day-traders, and Robinhood waifs into the most hideous stock-chasing mania in recorded history.

Here are just a few of the market extremities:

How could the S&P 500 be trading at its highest multiple in 70 years when the growth rate of corporate earnings has been sinking for more than two decades?

The recent S&P index value implies a PE multiple of 36.8X—a place the S&P 500 has never been before.

The forward PE is now above the record high reached during the dot-com madness at the turn of the century. 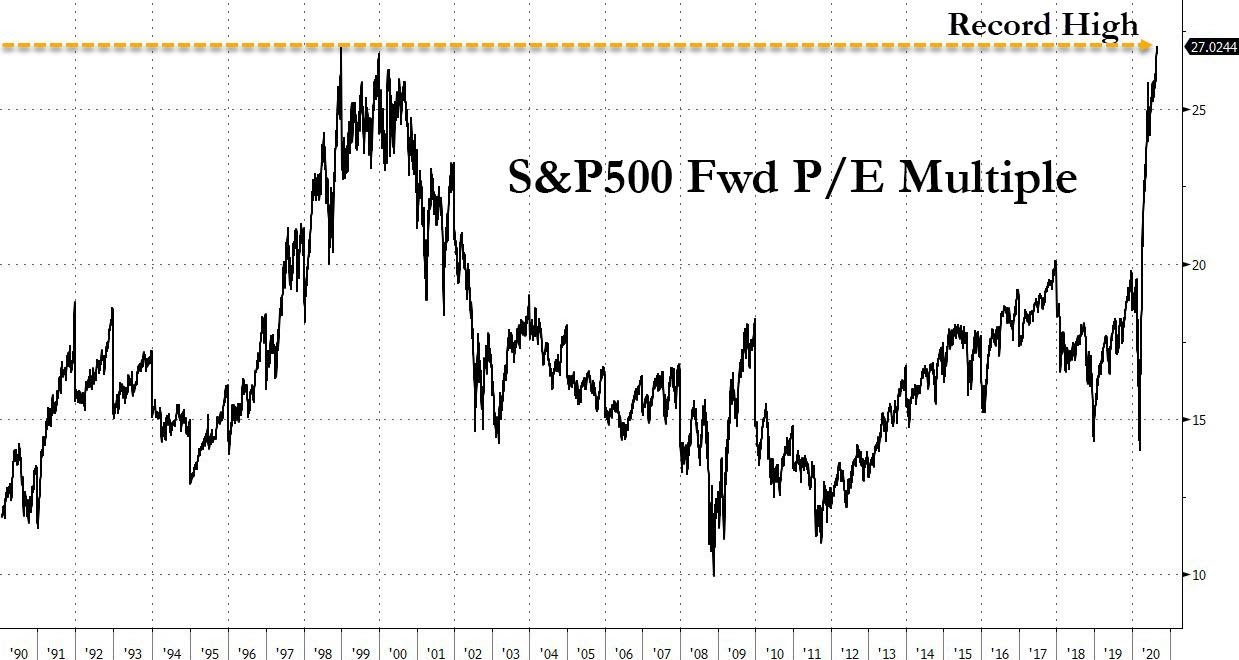 PE multiples at these levels imply double-digit earnings growth rates in the year ahead; it is relevant to start with the trend now in place. The only accurate way to measure the latter is on a peak-to-peak basis throughout the business cycle.

Corporate earnings peaked in Q4 2019, which was 12.5 years after the prior peak in June 2007. As it happens, the S&P 500’s earnings-per-share growth during that period—massive monetary stimulus to the contrary notwithstanding—was far below the rate of the two previous cycles.

Moreover, the 4.0% growth rate for the most recent cycle is not what it’s cracked up to be relative to prior cycles. That’s owing to the massive stock buyback campaigns and deterioration of corporate balance sheets since the June 2007 peak—as well as the one-time reduction in the corporate tax rate in 2017, a non-repeatable boost to cumulative S&P 500 earnings growth during the 12.5-year cycle.

Worse still, pretax corporate earnings in Q2 2020 plunged by 23% from their Q4 2019 peak—meaning that they have a huge hole to dig out of before there can be any growth in the post-Covid cycle.

Given today’s frenzied stock market, you would never guess that the $1.774 trillion level of profits reported for Q2 2020 was nearly identical to the $1.773 trillion level reported way back in Q4 2005.

In other words, corporate profits have been thrown backward by 15 years.

If you believed that current market levels had anything to do with the economic fundamentals, you would have to argue that the long-term trend of corporate earnings growth is fixing to pivot from the sinking pattern shown above to a new phase of parabolic rise.

This very idea is preposterous—besides, earnings don’t have anything to do with the casino’s current speculative frenzy.

Instead, what we have is pure, unadulterated inflation of PE multiples. That’s a monetary phenomenon—the AWOL inflation that the Fed heads keep gumming about.

Editor’s Note: The economic, political, and social volatility in the days and weeks ahead promises to be extreme. The impact on your savings, retirement funds, and personal freedoms could be unlike anything we’ve ever seen.