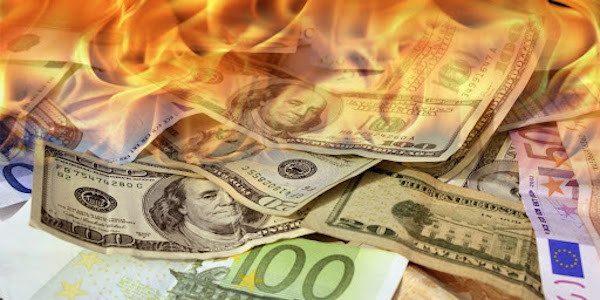 International Man: Decades of money printing have created enormous distortions in the market. It seems that the coronavirus popped the Everything Bubble. Where do you see the stock market going?

David Stockman: I’d say it’s going in a new direction, and it’s not up year after year, month after month, day after day.

It’s not going to be a world where buying the dip is a no-brainer thing to do.

It has got a long way yet to correct.

Who knows what earnings are going to be?

No one knows how long these lockdowns will last.

You look at the news flow every day, and it’s like a massive political arm-wrestling match between the White House and the Democratic governors and mayors.

I’m sure in their minds, these local and state politicians, think they’re serving the public good and protecting the safety and lives of their citizens. But, the fact is, back in the unstated regions of their brains, they’re focused on taking down the US economy, which was Trump’s only claim to reelection.

I think when push comes to shove in the great human struggle of things in our political system, this lockdown lunacy is going to be prolonged far longer than you can imagine, and the economic loss is going to be staggering.

Even the Wall Street brokers now—Goldman Sachs and the rest of them—are projecting a 25 to 30% GDP collapse on an annualized basis in Q2.

Just a few days ago, they were all expecting this to be one and done, and that in the next quarter it’ll level out—but that view is fading very fast.

We have a hand-to-mouth economy. By that, I mean no business could afford cashflow interruption because they had levered their balance sheet to the hilt or had spent most of their cashflow available to buy back their stock.

So, once you start these chain reactions, you have incredibly vulnerable business balance sheets in America that collectively have $16 trillion of debt.

That’s not to mention American households—half of them don’t even have $300 to last a week or two.

Overwhelmingly, 90% of the households in America have been told that they’re the Energizer spending bunny of American economics, and if you don’t have enough wages this week, borrow some money on your credit card and just keep on spending.

This has created a hand-to-mouth economy that has no immunities—if you want to use that metaphor in an economic sense. It cannot cope, and it has no antibodies to fight back against the interruption of paychecks and cash flow.

There is going to be broken furniture everywhere as it filters through an economy that is sitting with $74 trillion of public and private debt on its back. That’s how much we have today.

People need to focus on this fact, that we thought we had a warning back when the great financial crisis occurred in 2008 when Lehman Brothers went bankrupt, the Great Recession, all that.

At the time, there was $52 trillion of debt in the economy, and people said that we’re living beyond our means—we need to learn some lessons here and repair the excesses.

Well, that never happened. We’ve added $22–23 trillion of debt since then. Therefore, the economy is now even more fragile, even more vulnerable to any kind of dislocation.

Now, what we’re getting is the mother of all dislocations. It’s happening so fast and severely that it’s off the charts.

You can look at any of the so-called incoming indicators that everybody constantly jaws about on bubble vision on CNBC, and you will see that the last two data points are literally off the charts. The Empire State Index was out recently, and it’s down to -70, against a base of zero, and it usually says +20, 30, or 40.

Never has anything like this been recorded. We have an economy that’s going to implode in the next four or five months. Earnings are going to drop tremendously.

It’s going to be a question of whether the markets can convince themselves to “do the Rip Van Winkle thing, go to sleep on earnings for the next year, and start discounting 2022 earnings,” or something.

I don’t think that’s going to work this time. I believe there is going to be a real loss of confidence because the Fed has no dry powder.

What I’m saying is, the market that never stops rising has finally met its match.

The patented “buy the dip” mantra is going to keep the thing alive for a few more months until the last robo-machine and day trader has his brains blown out after they bought the dip one more time and then got monkey-hammered by another reversal.

That’s where I think we’re heading.

International Man: The Federal Reserve’s unprecedented bailout of everyone and everything seems to have no end. What do you think the consequences of this will be?

David Stockman: I think what people must get their minds around is that this is happening with such warp speed: job losses, cash flow, GDP, the federal budget.

What the Fed has done is more off the charts than anything we’ve seen yet.

In early March, the balance sheet of the Fed was at $4.2 trillion—after they gave up on quantitative tightening (QT) and normalizing the balance sheet—which they promised to do when Ben Bernanke took it to these high levels after the great recession.

Recently, that number was $6.2 trillion.

In merely 30 days, they printed $2 trillion of additional balance sheet or doubled the first trillion. That’s the level first achieved in September 2008—and had taken the Fed 94 years to create from the days that it opened its doors.

I calculated it: that’s about 35,000 days it took the Fed to get the first $1 trillion of balance sheet.

These madmen and women in the Eccles Building, it took them 30 days to create twice the amount of balance sheet that it took during those first 95 years of the Fed.

What does this mean?

It means that they’re destroying the financial markets as we know them.

It’s only a matter of time before they’re going to be in there, hand over fist, buying stocks.

Janet Yellen and all the rest of them are saying, “Well, maybe they need that additional power.”

How can you have capitalism when you have no capital markets?

It’s that simple. The Fed destroyed it.

The consequence will be massive speculation, malinvestment, and keeping all the zombies alive.

For instance, the high yield market had a significant dislocation recently—where yields soared from 5% to 10% or more—which was an effort by Mr. Market to say that there are a lot of borrowers out there that aren’t solvent. They’re going to have to meet their maker in Chapter 11.

So, what is the Fed trying to do?

It’s trying to prevent any of that from happening. The Fed wants to keep everybody that has borrowed up to their eyeballs alive.

Therefore, it means that the economy will become weaker, more stagnant, and more inefficiency-ridden with time.

If you don’t have the cleansing process of creative disruption, if you don’t allow the price of capital to reflect risk and reward, if you don’t permit failures to be eliminated and liquidated, you’re going to have either a sclerotic economy like Italy or England or even worse, a Soviet economy, if you carry this far enough.

Where it will lead is very hard to say. Obviously, not to anything good.

It is so off the charts, and ludicrous relative to anything anybody thought even ten years ago, certainly twenty or thirty years ago. It’s difficult to imagine how bad it is going to get, but it’s going to get pretty bad.

International Man: Those are some great points. Where do you see the future of the US dollar?

David Stockman: To paraphrase Winston Churchill about democracy, the US dollar is the worst currency imaginable—except for all the other currencies in the world.

In other words, all the central banks are doing the same thing the Fed is doing, only worse. It’s a race to the bottom.

The European Central Bank cut its policy rate to even deeper subzero, which is just crazy.

The Bank of Japan might as well just buy a paper mill and print paper until there are no trees left in Japan.

In the case of the US dollar, the traditional idea is that we’re going to destroy the currency. That’s true if the rest of the world is prudent.

Germany was a basket case economically; they were paying reparations and started up their printing press. There was massive capital outflow, they imported inflation, which then fed upon itself, and the whole wheelbarrow full of money thing happened.

That was inflation in one country when the rest of the world was trying to pursue relatively sound money.

By contrast, today, we have monetary inflation in all countries. So you look at the dollar, and you look at what the other central banks are doing, the dollar is the cleanest dirty shirt in the laundry. It’s probably going to get stronger, not weaker in the FX markets.

But that doesn’t mean that we’re out of the woods.

It only means that the central banks of the world collectively—which have already taken their balance sheets from $2 trillion in the late 1990s to over $25 trillion—are printing money at such a rate that they’re likely to bring down the entire world monetary system. Not simply the US dollar.

International Man: How will the Fed’s actions affect savers and retirees?

David Stockman: The essence of it is that the Fed policy is criminal—just flat out criminal—in terms of its impact on savers and retirees on a fixed income.

There is no interest rate left unless you want to speculate in junk bonds. Why should a 78-year-old be speculating in junk bonds to pay for rent or put food on the table?

That’s what this whole financial repression, zero interest rate, or subzero interest rate policy is doing. It’s hurting tens of millions of people who’ve tried to save and be prudent and not live hand to mouth.

If something like COVID-19 comes along, or an earthquake depending on where you live, or just a bad spell of health affecting your family, you need something to fall back on.

How can people save today when you get nothing?

Take somebody who worked in the steel mill 40 years, who was able to scratch and save and defer gratification. Let’s just say he came up with $300,000 of lifetime savings. He’s now retired. He needs to keep it liquid, but he’s earning less interest income per week than one cappuccino at Starbucks on a lifetime worth of savings.

You may ask these central bankers, “Well, what about the savers?” These idiots say that there is too much in savings.

Why do we have a $2.3 trillion bailout? Why are we giving helicopter money to upwards of 180 million people—who are going to get that $1,200 check?

Why are we bailing out small businesses left and right to have them preserve jobs?

Why are we doing all of that if there’s an excess of savings in the world?

In reality, there is no excess. It’s complete nonsense.

The idea that the central bank is there to subsidize, coddle, and bail out the borrower and savage the saver is just fundamentally wrong and goes right to the heart of why we’re in such big trouble.

Editor’s Note: The amount of money the that is being pumped into every corner of the economy by the Federal Reserve is unprecedented.

That’s precisely why NY Times best-selling author Doug Casey and his team just released a free PDF report on how to survive and thrive an economic collapse. It reveals how it will all play out and what you can do about it. Click here to download it now.