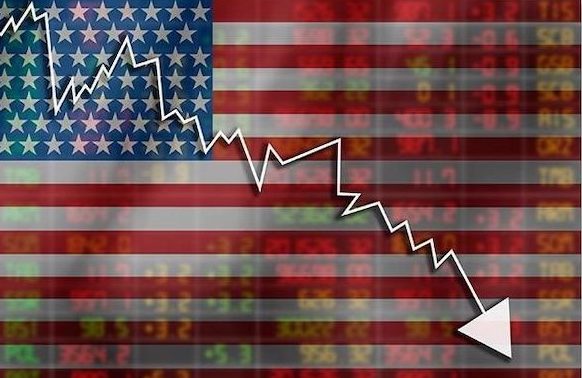 International Man: Trump’s America First economic policy seemed to help him win the 2016 election. He promised to renegotiate America’s trade deals and bring jobs back to the United States.

As president, Trump has used tariffs and other protectionist measures to try to reduce the trade deficit.

What do you think of Trump’s trade policies and tariffs?

David Stockman: The trade policies are idiotic. They haven’t improved the trade deficit. And have caused other problems.

We got the numbers in now for 2018 and we had the largest trade deficit in history!

The first point is that his trade policies are not accomplishing anything. In fact, it’s thrown many sectors under the bus. Manufacturers that import components from China are now paying much higher prices because of the tariff charge.

Farmers have gotten thrown under the bus in a major way. The whole agricultural export system that was patiently developed over many, many years has essentially been destroyed through retaliation.

Truth be told, there isn’t that much elasticity of supply in farm products in the short run. So, what’s happened is that South American soybeans are going to China. You can see on the trade maps that the bulk carriers are all heading from South America toward East Asia, and US soybeans are backfilling markets that used to be supplied by South America.

It’s one gigantic, pointless, stupid shuffle that has resulted from attempting to impose huge tariffs on one country.

Now, this is very different from the 1930s. Everybody likes to bring up a metaphor or image of the Smoot-Hawley Tariff Act. At least with Smoot-Hawley, it was across the board globally. It affected everybody.

Stuff is getting re-sourced and, frankly, re-badged to come from Vietnam, Malaysia, Indonesia, or other barren islands in the Pacific that produce nothing.

In some ways, it’s the craziest foreign aid program ever created. Trump doesn’t know that.

Maybe we’re finally doing some kind of restitution to the Vietnamese for destroying their country in the 1960s. We’re shuffling a lot of business their way and away from China, because Trump is trying to prove something to the movers in Beijing.

Trump often talks about the bad things going on in Mexico—saying that they need to enforce the border and threatening them with tariffs.

Mexico is going to be getting a lot of added value. The stuff that is produced in China will be shifted to finish production, packaging, or assembly in Mexico so that it doesn’t get hit with a Chinese tariff.

It’s rampant stupidity. The financial media, they cover this every day with bated breath about whether we’re going to get some kind of asinine phase one trade deal, which we actually now have. Maybe!

This is all without remarking on the chaos that’s being generated all over the world as a result of this giant-tariff-on-one-country policy that Trump has come up with on his own.

You don’t put a 19% tariff on $360 billion in goods from China, which can, with some adjustment, be produced in lots of other places around the world. It’s so obvious: A zero incremental tariff on the rest of the world suppliers is creating one giant arbitrage and incentive for re-sourcing production, relabeling stuff that now gets made in China and finished, assembled, and packaged somewhere else.

But this is where we are right now. How anybody thinks that any good could come out of this, or that it has anything to do with “Make America Great Again,” is beyond me.

Now, the one thing I will say is that it’s tarnished the idea of America first.

America First during the campaign applied to foreign policy and to our whole imperial presence all over the world—militarily, with all of these occupations, bases, and interventions.

At least in that arena, the metaphor of America First had some real power to stop being the policemen of the world and that the world can go on without American military intervention from one end of the planet to the other.

President Trump has tried to do that in little bits, but he’s constantly thwarted by the Deep State and the bipartisan establishment—who seem to think the US is the indispensable nation and that we need to be in every war, or the world is going to fall apart. That is of course totally untrue.

Where it counts with America First, Trump has made little progress, and where it shouldn’t have been applied—in trade, global commerce, and economics—it has made a disastrous mess.

International Man: Trump’s America First policy during the 2016 election appealed to the Rust Belt of the US and bringing jobs back. How have his trade policies impacted American industry and jobs?

David Stockman: I think there’s been a lot of boasting about anecdotes. In other words, some manufactures trying to curry favor with Washington put out a press release saying they’re bringing back 35 jobs. Maybe they are; maybe they aren’t.

Dell did it the other day, about manufacturing something in Texas that they were making there anyway. They had planned to move production of their high-end desktop abroad somewhere and they decided not to move it.

To get an idea of what’s really going on, it’s better to look at the data, specifically work hours. In manufacturing, they cut back overtime hours and even cut back scheduled hours, and now you begin to see the headcount changing.

So, I look at hours. In manufacturing, hours are down 1.2% in the last year.

For example, you had all this ballyhoo recently about the monthly jobs report. It seemed there were a lot of manufacturing jobs, but they weren’t new jobs. They were GM jobs that had temporarily disappeared due to a strike and had nothing to do with sustainable trends. And Trump keeps beating the tom-toms about all this alleged success.

My larger point is that hours are a far better measure of output. If you want to talk about bringing jobs back, use the hours measurement.

International Man: If Trump was serious about making the US industry competitive, what could he do?

David Stockman: The best thing he could do is a housecleaning of the Fed.

The Fed’s policies are the number-one enemy of real sustainable growth, job creation, and the American economy.

First, the 2% target inflation is absurd.

We’re in a world where we’re competing with $5-an-hour labor in China and $15 or $18 in South Korea. We should be deflating our economy, not inflating it, because when we inflate a price level, wages go up with it, and we become just that much more uncompetitive in global trade either as an exporter or in competition with the imports coming in.

The American worker isn’t any better off because he got an extra 2% in his wage. He’s paying 2%—if not far more actually—at the grocery store, at the doctor’s office, for education costs, and for transportation.

The first thing we need to do is get rid of inflation targeting and try to become more competitive by allowing the market to automatically do it. If the Fed wasn’t in the way, we would have high interest rates and a deflating price system as the economy attempted to adjust to the massive new competition in China.

Stock crashes lead to recession, owing to this crazy financial engineering that has become the total preoccupation of the corporate C-suites of America.

Companies are spending all of their cash flow, using up their balance sheet, in order to buy back stock and do ridiculous M&A deals that four years from now get unwound because they didn’t work. Then they get praised for restructuring. It’s just an endless cycle of stupidity.

If we got the financial market back on its own two feet—back to a free market, honest price discovery, and an end to this casino effect in the stock market—it would be a powerful message to the C-suites of America.

The message would be, “You’re not going to get yourself rich on stock options on Wall Street. Make the company better, more competitive, and profitable by investing on Main Street.” But that’s not what they’re doing right now.

We’ve had this huge increase in business debt since the 2008 crisis. It was about $10 trillion then, and its over $15 trillion now. They’ve increased debt by 50%. Yet real investment on Main Street after depreciation is no higher than it was in 2007.

To summarize, if we started deflating, rather than inflating our economy, if we get the C-suites back into the business of running companies and investing for the long haul rather than financial engineering on Wall Street, it would eventually and slowly heal our competitive situation.

It would lead to more jobs, higher incomes, more sustainable prosperity for the American economy.

But that requires a massive change at the Fed—a housecleaning, of both the people and the models and policies that they use.

Editor’s Note: The Federal Reserve’s monetary policies have created all sorts of distortions in the US economy. Easy money has flooded into the financial system creating artificial highs in the stock market, bond market and real estate market.

Even more money printing and negative interest rates will likely exacerbate the situation further until it reaches a breaking point. And most people won’t be prepared for what’s coming….

That’s precisely why legendary speculator Doug Casey and his team just released a complimentary report that reveals how to survive and thrive as financial uncertainty continues to unfold. Click here to download the PDF now.