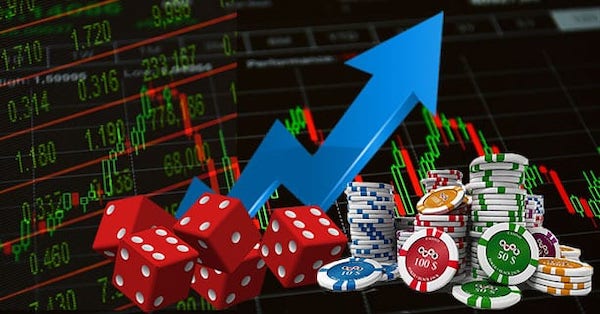 International Man: Thanks to the shutdowns, economic activity on main street is at a standstill. Government, corporate, and personal debt is skyrocketing. Yet, the stock market is in a mania. Has the stock market become out of touch with reality, and if so, what are the consequences of that?

David Stockman: Both ends of the Acela Corridor have lost their marbles. This year, Uncle Sam borrowed $4 trillion in six months, the Fed printed $3 trillion in three months, and Wall Street drove the S&P 500 to 52X reported LTM earnings in the context of a deeper economic plunge than occurred in the worst quarter of the 1930s.

Therefore, Washington has become disconnected from any semblance of fidelity to sound money and fiscal rectitude, while Wall Street has turned into an outright casino, valuing stocks based on endless Fed liquidity injections and the delusion that momentum chasing is an investment strategy.

With respect to the rampant folly in the Imperial City, Treasury Secretary Stevie Mnuchin has always reminded us of Alfred E. Neuman of “Me Worry?” fame at Mad Magazine. Recently, he more than earned that moniker when, in the context of the current monetary and fiscal lunacy, he proclaimed that, “Now is not the time to worry about shrinking the deficit or shrinking the Fed balance sheet.”

That was the so-called Conservative Party speaking, and it is a shrill reminder that the Trumpified GOP has gone utterly AWOL when it comes to its true job in American democracy, namely, resisting the Government Party (Dems) and its affinity for feeding the Leviathan on the Potomac.

That is to say, according to even the Keynesian deficit apologists at the CBO, Uncle Sam will spend $6.6 trillion during the current fiscal year (FY 2020) while collecting only $3.3 trillion in revenue. That’s Banana Republic stuff—borrowing 50% of every dollar spent.

Yet the advisory ranks of the potentially incoming Kamala Harris regency are even worse. They are loaded with “deficits don’t matter” ideologues and MMT crackpots who noisily argue that massive monetization of the public debt is not just a virtue, but utterly imperative.

Needless to say, this bipartisan commitment to all-in stimulus is financial catnip to the Wall Street gamblers because they are actually capitalizing into today’s nosebleed stock prices, not the present drastically impaired economy on Main Street but a pro forma simulacrum of future prosperity based on the delusional presumption that massive debt and money-pumping actually create economic growth and wealth.

The fact is, industrial production in August posted at a level first achieved in March 2006, and manufacturing output weighed in at levels originally attained in December 2004. So the misbegotten lockdowns and COVID-hysteria have cost the US economy 14–16 years of industrial production growth, yet this massive setback was not caused by some mysterious Keynesian-style faltering of “demand” that can allegedly be compensated for by new Fed credits plucked from thin air.

To the contrary, the current depression is the result of the visible shutdown and quarantine orders of the state, which are likely to linger for months to come or even intensify as the fall-winter flu season arrives. Undoubtedly, the Virus Patrol will spur further outbreaks of public fear based on “bad numbers” from the CDC, which are actually an agglomeration of cases and deaths from normal influenza, pneumonia, and a myriad of life-threatening comorbidities, not pure cases of the COVID alone.

But beguiled by “stimulus” and hopium, Wall Street completely ignores the contradiction between over-the-top demand stimulus and what amounts to supply-side contraction owing to economic martial law.

So, at 3400 on the S&P 500, the current LTM price-to-earnings ratio ranges between 52.1 times the earnings CEOs and CFOs certify on penalty of jail time ($65 per share) or 27 times the Wall Street brush-stroked and curated version ($125 per share), from which all asset write-offs, restructuring charges, and other one-timers/mistakes have been finessed out.

Of course, these deleted GAAP charges reflect the consumption of real corporate resources, such as purchase price goodwill that gets written off when a merger or acquisition goes sour, or the write-down of investments in factories, warehouses, and stores that get closed. As such, they absolutely do diminish company resources and shareholder net worth over time.

But for decades now, Wall Street has so relentlessly and assiduously ripped anything that smells like a “one-timer” out of company earnings filings with the Securities and Exchange Commission (SEC) that it no longer even knows what GAAP earnings actually are.

And it pretends that these discarded debits (and credits) to income are simply lumpy things that even out in the wash over time. They do not.

If ex-items reporting was merely a neutral smoothing mechanism, reported GAAP earnings and “operating earnings” would be equal when aggregated over several years, or even a full business cycle.

Yet during the last 100 quarters, there have been essentially zero instances in which reported GAAP earnings exceeded “operating income.”

So, in aggregate terms, several trillions of corporate write-downs and losses have been swept under the rug.

During the second quarter of 2020, for example, GAAP earnings reported to the SEC totaled $145.8 billion for the S&P 500 companies, while the ex-items earnings curated by the street posted at $222.3 billion. That amounts to the deletion of nearly $77 billion of write-downs and mistakes, and it inflated the aggregate earnings number by more than 52%.

The game is all about goosing the earnings number in order to minimize the apparent price-to-earnings multiple, thereby supporting the fiction that stocks are reasonably valued and that nary a bubble is to be found, at least in the broad market represented by the S&P 500.

Still, valuing the market at 52 times trailing-12-month earnings during the present parlous moment in time—or even 27 times if you want to give the financial engineering jockeys in the C-suites a hall-pass for $77 billion of mistakes and losses this quarter alone—is nothing short of nuts.

Yet, the gamblers in the casino hardly know it.

Wall Street has already decided that current-year results don’t matter a whit: the nosebleed-level trailing P/E multiples currently being racked up are simply being shoved into the memory hole on the presumption that the sell side’s evergreen hockey sticks will come true about four quarters into the future, and if they don’t, a heavy dose of ex-items bark-stripping will gussy up actual earnings when they come in.

Still, if you think that a forward P/E multiple of, say, 17.5 times is just fine and that flushing the one-timers is OK, then you still need $193 per share of operating earnings by the second quarter of 2021 to justify today’s index level.

International Man: What could derail the Fed’s ability to pump up the stock market casino with all this easy money? They simultaneously want zero interest rates and more inflation. It seems something has to give.

David Stockman: Yes, what’s going to “give” sooner or later is the entire house of monetary cards erected by the Fed and its fellow-traveling global central banks over the last several decades. What they are doing is based on the triple error that inflation is too low, that deeply repressed and falsified interest rates fuel real growth, and that private savers are a hindrance to optimal economic function and need to be euthanized via confiscation of the real (after-inflation) value of their capital.

In the first place, as Paul Volcker pointedly reminded, there is nothing in the pre-1990 textbooks that says 2.00% inflation is desirable and is to be pursued with fanatical intensity—even if actual inflation comes in only a few basis points below the magic target.

That’s because falsified interest rates and inflated financial asset values lead to massive malinvestment via rampant financial engineering in the corporate sector and reckless borrowing to fund transfer payments and economic waste in the public sector.

Nor is that a mere theoretical possibility. The rolling 10-year real GDP growth rate has now fallen to just 1.5% per annum, or barely one-third of the 3–4% per year rolling averages which prevailed during the heyday of reasonably sound money and fiscal rectitude prior to 1971.

Beyond that, there really hasn’t been any inflation shortfall from the 2% target, unless measured by the Fed’s flakey yardstick called the PCE deflator. For instance, since December 1996, when Greenspan uttered his irrational exuberance warning, the CPI is up by 2.09% per annum and the more stable 16% trimmed-mean CPI is up by 2.12% per annum.

That hardly constitutes a “shortfall” from target, but the Eccles Building money-printers make the claim anyway because the PCE deflator gained slightly less over that 23 year period, averaging an increase of 1.71 per annum.

The truth is, no one except groupthink besotted central bankers would think that a mere 30 basis point shortfall over more than two decades justifies the massive financial fraud of pumping trillions of fiat credit into the financial system.

That’s especially the case because the PCE deflator drastically underweights shelter costs and doesn’t even measure the purchasing power of money against a fixed basket of goods and services over time, anyway. Instead, it is actually a tool of GDP accounting that reflects the changing mix of goods and services supplied to the household sector.

That is to say, if someone chooses to live in a tepee and spend nearly all of their paycheck on computers, TVs, and other high-tech gadgets that have been rapidly falling in price, that doesn’t improve the exchange value of the dollar wages they earn; it just means that their tepee may be getting crowded with tech gadgets.

The same is true of the aggregate level. Just because the mix of goods and services changes over time, that doesn’t miraculously rescue the purchasing power of the dollar from the ravages of inflation.

Nor does it alleviate the savaging of lower- and middle-class living standards that are the direct product of the Fed’s misguided commitment to inflation targeting. In fact, during that same 23-year period, the annual rate of increase for professional services, shelter, food away from home, medical services, and education expense has been 2.6%, 2.7%, 2.8%, 3.5%, and 4.5%, respectively.

So once you set aside the foolishness of 2% inflation targeting and the Fed’s sawed-off inflation measuring stick (the PCE deflator), what you really have is growth stunting monetary madness. There is no other way to explain a Fed balance sheet that went from $4.2 trillion on March 4 this year to $7.2 trillion by June 10.

After all, the first $3 trillion of Fed balance sheet took nearly 100 years to generate, from its opening in 1914 to breaching the $3 trillion marker for the first time in March 2013. That the Fed has now become a monetary doomsday machine, therefore, is no longer in doubt.