The British Pound… the Canadian Dollar… the Australian Dollar… the Indian Rupee… the Japanese Yen… the Chinese Yuan… the South African Rand… and more.

This shouldn’t come as a total surprise…a trade war between global economic powers, global debt spiraling out of control…

The world is in uncharted waters.

Are the chickens going to come home to roost?

Today I’ll share a few of the major key themes that every investor needs to be aware of right now.

The Chinese Yuan is in Freefall

Given the recent onslaught of tweets from Donald Trump, you’d think the Chinese Yuan had just started falling.

In reality though, the Yuan has been depreciating since 2014.

This trend was further magnified when the Chinese government let the Yuan fall below its symbolic threshold of 7 Yuan per U.S. dollar.

When this happened, the #POTUS tweeting machine went out in full force, labeling China a currency manipulator. 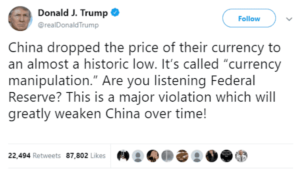 Below is a chart which shows the historical exchange rate between the Yuan and the U.S. dollar. 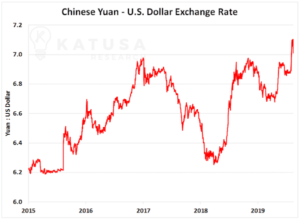 Currency devaluation aside, it makes a lot of sense to own assets which hold their value.

Physical assets like gold, art and vintage wine all make for excellent hedges against currency devaluation.

But it’s tough for major institutions or governments to buy enough art or wine to truly protect themselves. This leaves gold as the number one acquisition.

It should come as no surprise that central banks have been very active in buying gold.

The Chinese Central Bank is Buying TONS of Gold

And I mean that literally.

Below is a chart showing Chinese Gold Reserves. 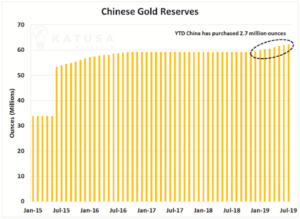 As a country focused on exporting more than it imports, it’s no surprise China wants to keep its currency value low. I could see the Chinese accumulating more gold over the coming months if their currency continues to weaken due to the trade war.

The U.S.-China trade war has not only impacted the American and Chinese economies, but the entire pattern for global trade as well.

Leading global economic indicators like national Purchasing Manufacturing Indexes have only recently begun to nosedive. And this could easily be just the tip of the iceberg.

To make matters worse, it’s getting harder and harder to find somewhere safe to park cash.

In times of chaos, government bonds are usually a standard go-to investment.

However, times are changing.

Right now, many government bonds actually have a negative yield.

You read that right – if you invest $100 into negative yield or a government bond in almost any European nation, you’re going to get back less than $100 in 10 years’ time.

How crazy is that?

Below is a table which shows the current yields on government bonds in nations around the world. The darker the red, the more negative the yield. 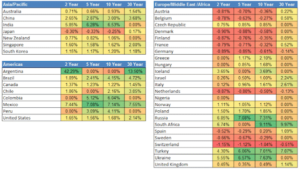 I don’t see this changing anytime soon either.

Below is a chart which shows the soaring amount of negative yield government debt. It has recently surpassed $15 trillion. 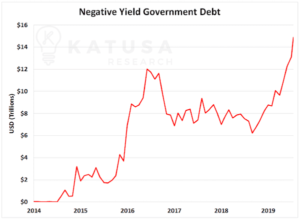 Just a few years ago there was virtually none. Below is a chart showing this dramatic increase. 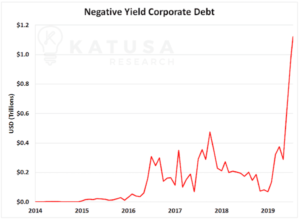 Unquestionably there is blood in the streets of the bond market. Investors have no choice but to look for other places as stores of value.

That’s when investors look to the famous “pet rock” and “barbarous relic” for some wealth protection.

After all, it’s that or slowly lighting your money on fire buying bonds in countries with negative interest rates.

With bond yields the least attractive they’ve been in years, investors and central banks are turning to gold.

And with the recent surge in the Commitment of Traders long positioning and the price of gold smashing through $1,500… many pundits are saying “THIS IS IT!” 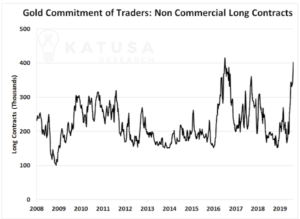 The technical chartists are all coming out with their best head and shoulders, bull flag, sliding wedge and upside-down watermelon patterns that determine the next leg up in gold.

To be honest, I couldn’t care less what the talking heads say their target price is.

From a fundamental perspective gold is very strong right now.

With nearly two decades of experience managing a fund focused on the commodity sector… I know that being positioned in the best gold developers and gold producers offers tremendous leverage to rising gold prices.

My subscribers and I are up over 100% on one of my strongest conviction investments so far this year.

Many of our other positions are up over 50% so far this year. Our portfolio is incredibly well positioned to profit from the global market chaos.

The unrest in China, the trade war and the rise of negative yield debt aren’t likely to be cleanly resolved anytime soon.

And in the meantime, many will flock to the safest haven they know – gold.

Editor’s Note: Negative interest rates are spreading like wildfire around the world. Investors have no choice but to look for other places as stores of value.

That’s why many smart investors are running towards gold. It’s also why the big buyers, like China and Russia, are accumulating as much gold as possible.

Negative interest rates and the devaluation of currencies will hurt a lot of people, particularly savers and retirees. But they will also give rocket fuel to the coming bull market in precious metals.

That’s precisely why legendary speculator Doug Casey and resource expert Marin Katusa just released an urgent video on this topic. Doug and Marin breakdown exactly what is coming, and what you can do about it. Click here to watch it now.