Longtime readers will remember the first time I put cannabis investing on your radar.

That was over two years ago.

At the time, there were only a couple dozen publicly traded cannabis companies. Today, there are over 300.

New ones seem to be popping up each week. Others are merely adding “cannabis” or cannabis-related words to their company names to tap into the green gold rush.

The truth is, most publicly traded cannabis companies are junk with abysmal financials.

It brings to mind Doug Casey’s saying: “When the wind blows, even a turkey can fly.”

Just about anyone can grow a marijuana plant on his back porch, from a practical standpoint. The barrier to entry to producing dried cannabis is low.

It is called “weed” for a reason after all.

Gone are the days when you could invest in companies that only cultivated the plant – or otherwise didn’t have a competitive advantage – and make easy profits.

The legal cannabis trend is no longer in its infancy.

Legal Cannabis – Where Are We Today?

I view the situation as a speculator, one who takes advantage of distortions – often politically caused – in the market.

And when you consider the effects of the near 80-year cannabis prohibition, it’s clear there are enormous distortions in the market. They are only just beginning to unwind.

Imagine what all the various industries that cannabis touches would look like had they developed in a free market – absent a long-term prohibition – and then think about where we are today.

For example, prohibition has needlessly stunted the research and study of cannabis’ obvious medicinal properties. I have little doubt research will unlock those in the months and years ahead.

But it’s not just medical.

According to a study the US Congress commissioned, there are around 25,000 hemp-based products – clothing, food and beverages, cosmetics, paper, fibers, and so forth. Remember, as large as the market for these 25,000 products is, hemp itself is just one aspect of the cannabis market (remember, hemp and marijuana are from the same plant species).

And the US federal government legalized hemp not even nine months ago.

Big Alcohol, Big Tobacco, and soft drink companies are just starting to get involved with cannabis and are developing entirely new categories of products.

It’s hard to wrap your mind around just how significant the total market potential of legal cannabis is.

I’ve compared it before to the repeal of alcohol prohibition in 1933. But let me remind you, alcohol use was primarily just a recreational market.

Legal cannabis will disrupt the alcohol, tobacco, and pharmaceutical industries, among others.

Together, we’re talking about a multiyear megatrend that could disrupt $5 trillion in global markets:

However, we are no longer in the earliest days of this exciting trend. The wind is blowing, and there are some turkeys flying.

But there are still big profits to be made with the right companies in the right niches.

There are over 113 chemical compounds in the cannabis plant. We only know a little bit about two of these, and just those two (THC and CBD) show enormous medical potential. That says nothing about the other therapeutic, recreational, and additional commercial value they may have.

THC (tetrahydrocannabinol) is the psychoactive component that gets users high and has medicinal properties. CBD (cannabidiol) has medicinal and therapeutic properties and no intoxicating effects.

Today, we are just scratching the surface of the incredible medicinal properties of THC and CBD.

Each of the 113 cannabinoids – and each combination – interacts with the human body in a different way to produce a different effect.

Selecting specific cannabinoids – and combinations of them – is crucial to studying how they can be used to treat diseases or have therapeutic, recreational, or other commercial value.

That’s why cannabis extracts are so crucial. They’re what allow us to isolate and study each of these 113 chemical compounds, and the thousands of combinations of them.

Below is a chart of the medicinal potential and applications of some of the more common cannabinoids: 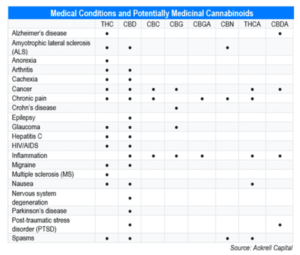 I have no doubt there will be significant breakthroughs in the months and years ahead as THC, CBD, and especially the other 111 cannabinoids are thoroughly researched.

Just think of how big the cannabis boom has been so far, and that’s only with our minimal knowledge of just THC and CBD. The true potential of all 113 cannabinoids – and the thousands of combinations of them – is truly mind-boggling.

That’s the opportunity today. It’s the cutting edge of the cannabis industry and the key to the next wave of profits.

In sum, it will be years before the massive distortions that 80 years of prohibition has caused will be worked out, and the various markets mature to their full potential.

But there are still big profits to be made in this space… if you know where to look.

Editor’s Note: Legal cannabis is one of the few issues politicians on both sides of the aisle can agree on in this highly-charged environment.

With the 2020 election season is kicking into gear, Trump has a crucial card to play. A move towards legalization could swing the election in his favor.

That’s precisely why, Doug Casey’s colleagues just released a timely video. It shows how Trump could legalize cannabis to win the election and how to position yourself for big profits. Click here to watch it now.