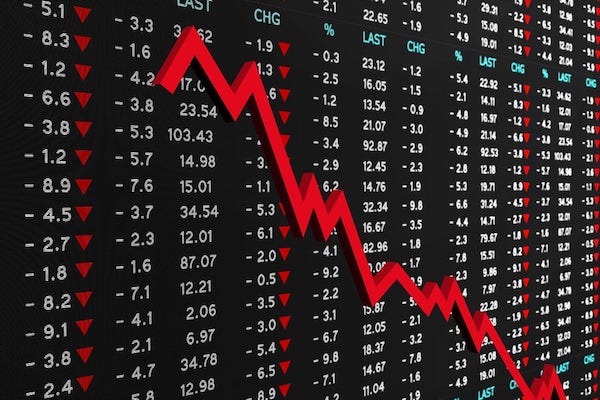 International Man: What are some signs you look for when a market has reached the bottom?

Doug Casey: The oldest saying in the market is “buy low, sell high.” But people usually do the opposite. It’s very easy to be a contrarian in theory, but amazingly hard in practice. Anyway, you only rarely get an absolute top or bottom in something. What’s important most of the time is relative value.

That said, let me predict the next absolute top in gold and bottom in the stock market. They could very well happen simultaneously. The signal will be when Slime or Newspeak (should either still exist at the time) run a cover showing a golden bear tearing apart the New York Stock Exchange. At that point, you’d want to sell anything to do with gold and buy common stocks.

I’ve also said that when you can buy common stocks for an average dividend of 8%–10%, it’s time to start moving back into them; that’s also a turning point to watch for.

It’s happened before, and it will happen again.

Most people are unaware that during the last depression, the Dow Jones Industrial Index was yielding about 13%, even after dividends were cut dramatically, so that’s how cheap things can get. During the mid-80s, I was writing about three big markets—Spain, Belgium, and Hong Kong—that were all selling at half of book, 12–15% in dividends, and five times earnings, but nobody cared, because it was the bottom…

For real estate, I don’t expect a bottom until properties being sold for back taxes go begging or until you can get about a 10% net rental return. Still, that’s going to be tough because property taxes are so high and going higher.

International Man: What are some of the craziest things you’ve seen at market bottoms?

Doug Casey: I’ll give you a classic example.

It doesn’t seem long ago to me, but a lot of people reading this now weren’t even born in 1976.

Everyone felt fearful and bearish about gold.

There was even a famous politically-connected investment advisor named Eliot Janeway who said that if the US government didn’t support the price of gold, it was going to $8 an ounce. He was a blowhard and an idiot, but an excellent carny barker.

In any event, on almost the same day as gold hit bottom at about $102 an ounce, there were riots in Soweto, South Africa. Everyone thought that the apartheid regime was going to collapse.

Between the gold price slump and the riots, South African gold stocks absolutely did collapse. There were stocks—which have subsequently been merged—like Grootvlei, Leslie, Bracken, and Stilfontein, that were yielding 50%, 60%, and 70% in current dividends.

I know that sounds incredible, but that’s what their indicated yields were.

I was a stockbroker at the time and ran ads in the Wall Street Journal about gold stocks. One guy that responded was named Elmer. Elmer said that he’d come into Washington, DC where I was, and we’d talk—he was going to invest “a little money.”

He sounded like one of those good old boys that had a fat bank account, but it turned out when Elmer got in, “a little money” was actually just a little money. All he had was $2,500.

So, I bought him a portfolio of all these things. It was actually the very next day when the news of the riots hit, and the stocks were all down.

Elmer calls me and says, “I’d like to take those stocks back.”

I said, “Elmer, this isn’t Woolworth’s. You can’t take them back.”

So, he hung up the phone.

When a customer reneges on a deal, a broker can either sell them into the market—and he eats the commissions, bid-ask spread, and losses himself—or he can journal them into his own account.

Commodity stocks are great if your timing is good. I wrote an article in about 2001 talking about uranium—why uranium stocks, of which there were only four or five at the time, were super bargains because no uranium mines could make money.

The market price for uranium was about $12 a pound, and it cost about twice that for anybody to mine it.

A couple of years later, there was a bubble in uranium—it ran to about $140 a pound. All of a sudden, there were not only four or five uranium companies in the world—there are about 400 or 500.

That was the top of the bubble. It broke, almost all those companies went bust, and once more uranium—at around $24 now—is selling for about half of production costs.

The most recent bubble that we’ve had is marijuana stocks. A huge amount of money was made on them, and they were very good to me as well.

But the fact is that out of the hundreds that went public, 90% of them are going to go bankrupt, dry up, and blow away regardless of how pot as a business does for the survivors in the future.

You can forget about the pot bubble for many reasons for some years. It’s like growing highly taxed, highly regulated alfalfa at this point. And the crypto bubble has blown up as well. But, incidentally, I think it will be reinflated in the next few years—but that’s another story.

The question is what’s the next bubble going to be?

My guess is that it’s going to be gold. There’s going to be a wholesale panic into gold because all of these governments around the world are printing up money by the bucketload.

There’s going to be a panic into gold and a super panic—I suspect—into gold mining stocks.

International Man: What kinds of opportunities does the extreme pessimism at market bottoms create?

Doug Casey: As long as civilization doesn’t collapse, there are always going to be tops and bottoms.

The question is whether what’s going on in the United States now is going to be just another cyclical downturn—or whether it will turn into something like Russia in 1917, Cuba in 1959, Vietnam 1975, or China in 1949.

You just don’t know. Anything is possible. The Greater Depression is going to be nasty indeed. Nothing lasts forever, however. Hopefully the kind of people who want to be the Democratic nominee aren’t harbingers of the future in the US.

This is the problem with “crisis investing” as a method. Sometimes you can’t be sure. Look at Japan and Germany in 1946.

They were bankrupt, cities were flattened, and people were poverty-stricken. Who could have guessed that they would have come back and have been two of the most powerful countries in the world only a generation or so later?

I’m willing to place a bet that within the next five years, the US is going to experience an existential crisis. At that point, you’re going to have to decide when blood is in the streets, if you have any capital, whether you want to put it into the stock market.

That’s the next period of extreme pessimism that I see in the market a few years down the road, and it’s going to be serious.

Editor’s Note: Doug Casey’s forecasts helped investors prepare and profit from: 1) the S&L blowup in the ’80s and ’90s, 2) the 2001 tech stock collapse, 3) the 2008 financial crisis, 4) and now… Doug’s sounding the alarms about a catastrophic event. One he believes could soon strike America. To help you prepare and profit, Doug and his team have prepared this free special report. Click here to download it now.