Buy This Pillow and Change Your Unhappy Life 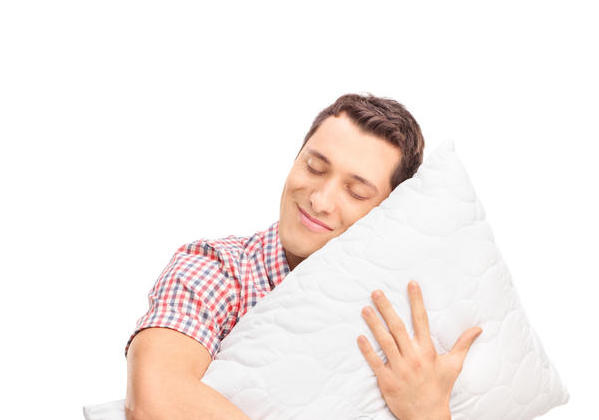 There’s a popular advert on American television in which a smiling born-again former drug addict clutches a pillow, which he claims will so improve your sleep that your whole life will change for the better.

Of course, in reality, the premise is not at all credible. And the presentation might even be considered to be cartoonish.

And yet the pillows are selling like hotcakes. They are the latest hula hoop, the latest wrinkle cream, “guaranteed” to improve your life dramatically in a very short time.

And of course, this miracle product doesn’t come cheap. It sells for over fifty dollars, whilst a now-outdated shredded foam pillow can be had for less than twenty dollars.

As with all such products, on rare occasion, someone will actually question the claims being made, and there have been those who have cut open the miracle pillows and found that they are filled with… shredded foam.

But of what use is this information to us? After all, with the present upheaval in our world, we have far greater concerns than whether we’re being suckered into a false claim by someone on television. We’re worried about our socio-economic and political future.

In any country where free-market prosperity is dominant, most all people recognise that if they go to work, make money, spend some on their basic needs and save the difference, their lives will be transformed. There are no miracles – it won’t happen overnight. But over time, they’ll be able to get a nicer car, buy a home and even save for retirement. Not bad.

The trouble is that this simple equation tends to get derailed by governments. They have a nasty habit of growing into a cumbersome beast that must be fed enormous sums of money in order to continually expand in ways that are in fact unnecessary to the populace. And that money must come from somewhere – from the very people whom political leaders were elected to represent.

Those countries that made up the former Free World (the US, UK, Europe, Australia, Canada, Japan, etc.), were once a cornucopia of opportunity. After World War II, they charged forward with a free-market system that allowed the average man to have a decent car, a mortgage-free home by the time he was forty, plus a modest but comfortable retirement.

Then the governments of those countries expanded dramatically. And if a government – any government – is to continue to expand, it will fail to serve those very people who elected them. Truth be told, the greater the degree to which it taxes (robs) those people, the more the government thrives.

And along the way, the government in question almost invariably takes on ever-increasing debt to further expand itself.

Eventually, the levels of taxation and debt become so burdensome on the populace that they realise that the system they live in doesn’t really work for them at all. They’re unable to afford that house; they can only lease a better car, not buy one; and their retirement plan turns out to be woefully underfunded.

In the midst of this, the capitalist free-market system that had worked so well is increasingly compromised. The “free market” is destroyed, one act of legislation at a time, until it’s no longer free at all, but a perverse combination of socialism and corporatism.

Yet the political class continue to refer to what remains as capitalism. The net result is that the population come to believe that capitalism has failed, not understanding that the real problem is that they no longer live under capitalism.

Then, along come those political hopefuls – the Lenins, the Robespierres, the Ocasio- Cortezes – who rail about how the free market system has failed the people, leaving them without the ability to attain a better life.

They promise a collectivist solution, in which all the spoils will be divided up equally. Since you’ve been unable to attain your goals within the existing system, buy the socialist pillow and you’ll have all those things that the existing system has denied you.

No explanation is provided as to how this can be made possible, but the promise of a miracle pillow is very hard to resist.

It’s Not Cheap, but It’s Worth It

Yes, for this change to take place, there will be a cost. Your basic freedoms, your independence and your self-reliance will all have to be sacrificed, but think of what’s being promised here. It’s a small price to pay.

“A chicken in every pot,” “free healthcare,” “universal basic income.” Just as so many products on television are described as guaranteed, those promoting collectivism offer the assurance that the promised system is guaranteed. And just like so many products on television, the guarantee turns out to have enough disclaimers in the fine print to ensure that the easy life being promised will never become a reality.

For over a century, socialism, fascism, communism and other forms of collectivism have been almost irresistible to those whose prospects have slowly declined, as their governments have systematically dismantled their free-market systems.

When real opportunity for prosperity has been eaten away by governments to the point that the population fall down and skin their knees, the nanny state – the very entity that removed that prosperity in the first place – offers up a lollipop and offers to wipe away the tears.

Incredibly, the lollipop is too tempting to refuse. In country after country, collectivism has been welcomed as a panacea, yet has always proven to fail in delivering its promises.

Whether in Russia, Cuba, Argentina or Venezuela, it begins with the empty promise of a comfy pillow to take away all the cares of life, then heads steadily downhill, producing universal suffering and poverty.

In all cases, some major event pushes the populace over the edge. Whether it’s a market crash, a war that has cost untold lives, or even a virus whose severity has been overdramatized and manipulated, when offered the miracle pillow, Boobus humanus has an extraordinary predilection for reaching out and grabbing it.

New York Times best-selling author Doug Casey and his team just released a free guide that will show you exactly how to survive and thrive in the coming crisis. Click here to download the PDF now.