Dietrich Mateschitz was a director for a bathroom products company. In 1982, while on a business trip in Bangkok, he sought something to cure his jet lag.

That’s when he discovered a local beverage made of caffeine, taurine, and other stimulating substances. He was hooked…

He quit his job in 1984 and set out to sell these tonics around the world. By 1997, Dietrich was selling a carbonated version of the drink in Europe and the U.S.

The name of the drink?

And it disrupted the soft drink industry…

Red Bull created an entirely new category of products: energy drinks. And it wasn’t long before others followed suit.

Since it introduced its “Monster Energy” drink in 2002, Monster’s share price has skyrocketed by 70,907%. Take a look: 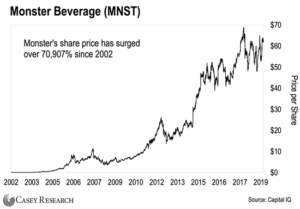 And it’s not just Monster.

In the two decades since Red Bull kicked off energy drinks, the market has exploded.

It’s now valued at over $43 billion worldwide. That’s 4% of the global soft drink industry, which is worth $1.1 trillion.

It goes to show how much money you can make when you invest in new subindustries and categories of products early on.

And today, we are on the cusp of a similar transformation. But this time, we’re talking about a much larger market…

This transformation could disrupt a global market that’s worth $5 trillion… and growing.

Many new subindustries are being born out of the cannabis industry. If you haven’t yet, let me show you why now’s a great time to get positioned…

Legal cannabis will make what Red Bull did to the soft drink industry seem like small potatoes.

It’s not going to create just one new subindustry, like energy drinks. It will potentially create dozens.

The illicit recreational market is worth $200 billion globally. Ultimately, this will become a new legal industry with all sorts of subindustries – including dry flower, edibles, oils, vaping, etc.

Like Red Bull in the ’90s, legal cannabis is also going to disrupt the soft drink industry.

But it won’t stop there. It will also disrupt the alcohol, tobacco, and pharmaceutical industries, among others.

Together, we’re talking about a multiyear megatrend that could disrupt $5 trillion in global markets.

You can see this in the table below: 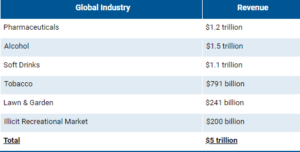 And the key to this is Big Business…

Big Business Is Catching On

Big Pharma, Big Alcohol, and Big Tobacco (among others) are making moves.

As I’ll show you in a moment, large companies are laying a roadmap for other mainstream players to enter the space.

Remember, cannabis is still illegal in most of the world. And Big Business has just barely started to get in. That means the legal cannabis megatrend is closer to its beginning than its end.

In other words, the risk of investing in legal cannabis has gone way down… but the upside is still attractive.

It will be years before the newly created cannabis subindustries and products are fully developed.

But for us, as early investors in the right companies, that means even bigger profits as the rest of the world catches on.

Pharmaceutical companies have been ramping up their inroads into the cannabis space recently.

Take Novartis, for example. With a market cap of over $200 billion, it’s one of the largest multinational pharmaceutical companies in the world.

The Canadian cannabis company Tilray announced it signed a partnership agreement with Sandoz, a subsidiary of Novartis. Sandoz will help Tilray distribute medical cannabis in legal markets worldwide, over 35 countries in all.

The agreement covers research and development work that includes the expansion of Apotex’s medical marijuana portfolio and the development of proprietary formulations for cannabis-based medicines.

Finally, in the U.S. last year, the FDA approved a prescription cannabis-based drug for the first time ever.

As regular readers know, it’s called Epidiolex, and it’s used to treat seizures. Sales of Epidiolex are expected to reach $1.3 billion in the next couple of years… And that’s just one cannabis pharmaceutical product.

As I mentioned before, this is just the beginning. I expect a tidal wave of money from Big Pharma to flow into cannabis as the plant’s true medicinal properties are fully developed.

With a market cap of over $35 billion, Constellation is the third-largest beer company in the U.S. It owns the popular Corona brand, along with a collection of other household names. It has over 100 brands in total.

Constellation, a Fortune 500 company, has made a name for itself by identifying early-stage consumer trends with strong growth potential.

It was the first large U.S. company to make a major move directly into the cannabis space. It has invested over $4 billion into Canopy Growth, one of the largest publicly traded cannabis companies.

Constellation plans to develop cannabis-infused drinks with Canopy. As Canopy’s CEO put it, “We’re talking about going into a bar and having a Tweed and tonic.”

Tweed is a brand of cannabis his company produces. Canopy is working on possibly dozens of cannabis-infused beverages. They could include any mixture of up to 80 cannabinoids.

It’s reminiscent of what Red Bull did with vodka back in the ’90s, but potentially orders of magnitude larger.

The Constellation-Canopy deal fueled a surge in alcohol-cannabis deals as competitors scrambled to get a foothold in the new space.

Alcohol companies of all kinds, from producers to distributors, are rushing to partner with cannabis companies. These are just some examples:

Major soft drink companies are showing interest in the cannabis space, too. Specifically, they are looking at non-intoxicating health and wellness beverages infused with CBD.

Late last year, it suggested it might partner with Aurora Cannabis to produce CBD-infused beverages. These beverages could be used to treat inflammation, pain, and cramping, among other things.

The deal didn’t end up happening. But the fact a company as big as Coca-Cola even considered it is bullish for the industry.

Around the same time, PepsiCo’s CEO said the company was “looking critically” at the market.

Another former Coca-Cola executive, Tim Haas, joined the board of directors of New Age Beverages, a Colorado-based company that develops cannabis-infused drinks.

The trend is clear: Legal cannabis is disrupting today’s biggest industries… and there’s never been a better time to take advantage.

Editor’s Note: At this point, the legal cannabis trend is unstoppable. That’s why alcohol, tobacco, pharma, and soft drink companies are all making significant moves into the space.

President Trump surely understands this too. Cannabis legalization would boost the economy and his chances of reelection. There’s an excellent chance Trump will legalize cannabis in the months ahead. It’s not a story you’ll hear about in the mainstream media.

That’s why Doug Casey’s colleagues just released an urgent video. It has all the details on what kind of surprises could be ahead as we get into the election season. Click here to watch it now.