Beware of the Greatest Insider Gold Trade Scheme EVER 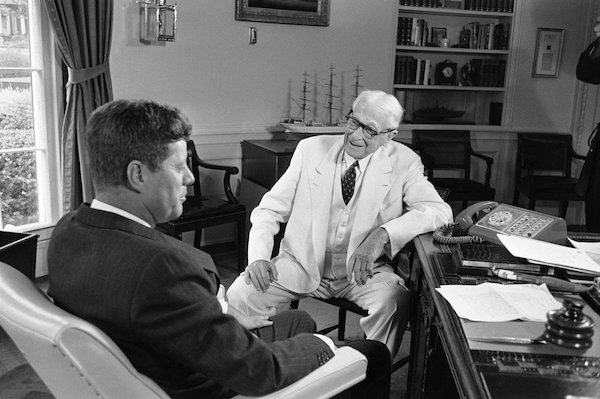 If you own precious metals, please pay attention.

Bernard Baruch was one of the wealthiest speculators in American history.

He started with nothing and worked his way up to becoming a war effort hero and a trusted advisor to many presidents during his lifetime. But he made his fortune speculating.

I’ll leave that explanation for another day.

Today’s missive is about the biggest bet that Bernard Baruch ever made. But not only did the U.S. Government take it from him; they also tormented him for doing it.

Bernard Baruch’s personal stash of bullion was a little over 75,000 ounces.

That’s over USD$ 125 million in bullion at today’s prices. He was America’s first “Bullionaire.”

So what happened to all that gold?

America’s First Bullionaire Was Blindsided by an Executive Order

On April 5, 1933, one month after taking office, President Roosevelt ordered all Americans, by Executive Order, to surrender their gold at the government fixed rate of $20.67 per ounce.

All gold coins, bullion and gold certificates had to be surrendered to the Federal Reserve by May 1st, 1933, less than one month after the President’s Executive Order.

Over 14.5 million ounces were surrendered to the U.S. Federal Reserve.

Nobody surrendered more gold bullion to the U.S. Federal Reserve than Bernard Baruch, with his stash of over 75,000 ounces.

At the same time, the going rate in Europe for gold was about $29 per ounce equivalent.

The Executive Order to surrender their gold didn’t give U.S. citizens enough time to organize the required logistics to play the arbitrage opportunity, not to mention that President Roosevelt had made it illegal to do so.

Millions of Americans were forced to sell their gold at below international market rates.

Here’s what’s not mentioned in the history books of this period:

The U.S. government made a serious inquiry into all the mines and gold dealers on:

Bernard Baruch was asked to testify in front of the U.S. Secretary of the Treasury and explain why he had bought so much gold. In fact, the president of one of the mining companies that sold their gold to Baruch also had to testify about why Baruch had bought all the gold.

Desire to protect his wealth and distrust of the fiat currency wasn’t an acceptable answer in the eyes of the U.S. Treasury Department.

So You Want to Be a Bullionaire?

Becoming a billionaire means you’re one of 2,100 people out of 7.8 billion people on planet Earth. It means you’re part of the top 0.000027% of the world’s financial elite.

But there’s a new class of elite wealth being created that I call the “Bullionaire Katusa Class.”

A Bullionaire is someone who has quietly accumulated over 1,000 ounces of gold.

Before you set your sights on becoming one of the global Bullionaires, please understand what happened to U.S. Bullionaires in 1933.

Bernard Baruch was 100% correct in his prediction that the value of gold would increase. However, he didn’t make a penny on his gold bets because he was forced to surrender his gold to the government—at the government’s fixed price.

In fact, the whole saga cost him a lot of money and was the source of many headaches as he had to testify and defend himself from the government inquiry on why he bought so much bullion.

President Roosevelt knew exactly what he was doing.

America was in a deep recession in 1933. Famous individuals like Jesse Livermore owed millions and went bankrupt. Shortly after the Gold Reserve Act in 1934, Livermore filed for bankruptcy a third time.

Many popular business executives that were household names committed suicide between 1932 and 1934. Eastman Kodak and Ivar Kreuger killed themselves.

The U.S. economy hit all-time lows and recorded its highest unemployment rate ever up to that point. Deflation was destroying lives, families and the morale of a nation.

Governments fear deflation much more than they fear inflation. President Roosevelt wanted inflation, and the fastest way to do so was to reprice the gold they just nationalized from their citizens.

By repricing gold, President Roosevelt brought inflation to the economy. And it worked.

Before the U.S. government did so, they forced their citizens to surrender their gold coins, bullion and gold certificates.

Knowing they would reprice gold after they forced their citizens to surrender the gold, this became the greatest insider trading scheme ever seen in the world.

Government Insider Trading Coming to a Country Near You

All other governments besides the U.S. government are breaking under the debt and deflationary pressures in their domestic economies. They will be forced to increase their take on foreign-owned gold mines.

Those same governments will copy President Roosevelt’s Executive Order of forcing all citizens to sell their gold coins and bullion to the government at a fixed price in the local currency.

So, how does a Bullionaire protect their wealth from being surrendered to their government?

With that being said, after the 1934 U.S. Gold Reserve Act, the miners experienced their greatest period of free cash flow and dividends.

We’re entering an incredible gold market. It’ll be volatile on both the upside and the downside.

Within the next five years, gold will attract front-page attention as it hits prices that we’ve never seen before. Silver will also follow.

Broke governments will want their share. This means you must understand the political risks that are currently not being priced into mining company or royalty company share prices.

Those who think they’re untouchable because they hold gold bullion, just remember what happened to one of the greatest speculators, Bernard Baruch.

Lastly, be prepared both mentally and financially for what to do if gold prices take a big hit to the downside or if it breaks to new highs.

Foreign governments are fighting for their survival, and we’ll start to see outright nationalization, increased taxes and forex controls of many assets.

Editor’s Note: Do you want to avoid making the same mistake every other gold investor is making right now?

Then we urge you to watch this video.