“Ask Not What Your Country Can Do for You…” 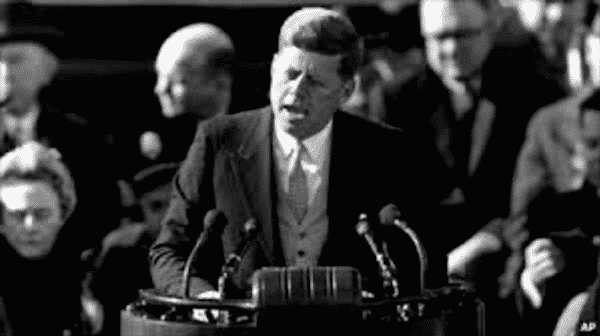 In his inaugural address in 1961, President John Kennedy gave a stirring speech in which he famously stated, “And so, my fellow Americans: Ask not what your country can do for you – ask what you can do for your country.”

He then went on to say, “Finally, whether you are citizens of America or citizens of the world, ask of us the same high standards of strength and sacrifice which we ask of you.”

John Kennedy was by most measures, one of the better US presidents. But he did believe in the concept that the role of the people of a country should be to serve their country and to sacrifice themselves to it.

Let’s put this in perspective.

In seeking employment, you don’t seek a particular job because your primary concern is that, in that job, you can “make a difference.” This is a nice thought, but it’s not why you seek a job. You seek it because it will provide you with what you’re after for yourself – possibly a good salary, possibly interesting work, possibly fringe benefits, etc.

You certainly don’t seek a particular job because they need you to sacrifice for them.

For their part, potential employers generally try to provide good working conditions, good salaries and benefits in order to attract the best people to want to work for them.

It’s the same when you seek to buy products. Advertisers appeal to your desires, hoping to convince you to buy their widget, rather than a competitor’s widget. Never do they say, “We want you to buy our product because you have an obligation to provide income for us.” You make your choice solely on whether that product appeals to you.

And in seeking a place to live, you might look for a community that’s relatively safe, or has good schools, or has good infrastructure. You don’t choose a community because it needs you more than another town or city.

Communities try to put on their best face to attract better residents. They most certainly do not say, “Move here so that you can serve us.” That would discourage potential residents, not encourage them.

And yet, for millennia, governments have taken the odd stance that you should serve them – to be “patriotic.” The premise is that since, by an accident of birth, you were born in a particular country, you therefore owe dedication and sacrifice to that county.

Throughout your life, it’s suggested to you that you should not only willingly sacrifice yourself to your country of birth; you should even take pride in paying whatever tax they burden you with.

The supreme example of this is found in countries that wage war against each other. At such times they go all out to remind you that you should take pride in becoming cannon fodder. As stated by the Roman poet Horace, “Dulce et decorum est, pro patria mori.” (Sweet and fitting it is, to die for one’s country.)

To date, I’ve never met an individual who chose his place of birth. To my mind, that means that since it was beyond his choice, he owes no particular loyalty to that country. If he chooses to swear allegiance to it at some point, that should be his prerogative, not his obligation.

Let’s look at this in another light.

When I was an infant, I was baptised into a church. That church, throughout my childhood, reminded me that I was a member and owed my allegiance to, not only its perceptions of a God, but to the institution of the church itself. By the age of thirteen, I had come to the conclusion that I owed them no such dedication, as I had not chosen to be baptised. The church and I parted ways. Whatever spiritual leanings I retained were independent of any loyalty to a particular institution that used religion as its format.

By contrast, the Amish, who admittedly run a pretty strict shop, leave baptism to the individual. A young Amish fellow has no responsibility to the church. He may smoke, drink alcohol, go to parties and pursue other worldly pleasures until he makes the decision to join the church of his own volition.

Most young Amish men choose to join the church in early manhood, often because they can marry a woman who’s a member of the church only if they themselves have joined. This is certainly an incentive, but the fact remains: The choice is their own.

Once we have all of the above in perspective, we may ask ourselves what role our government should play in our lives.

We know that advertisers do their best to con us into buying their products; employers often offer attractive employment packages; and even towns and religions make an effort to present themselves in a favourable light. The objective is to get us to buy in, to take up their offer.

However, governments make less of an effort in the way of a sales pitch. Certainly, they promote themselves as being good leaders, but the loyalty and dedication tends to be something that’s expected by them. If they don’t receive it, they tend to take it by force.

Most all countries issue passports and each regards passports as a privilege, not a right. You’re allowed a document for travel only if they see fit to let you go beyond their borders.

Most countries, however, are very lenient in this regard. As long as you commit no major crime, your international movement is not curtailed. And not many countries insist that you join their armed forces. The larger the country, the more likely that these requirements will be imposed upon you.

And the more your country of birth seeks to keep you in, the more you should question whether your unwilling “baptism” is in your own interest.

We’re entering an era in which some of the world’s most prominent countries will be increasing their migration controls. Even countries that are very free when allowing new residents in, are already passing legislation that will prevent born citizens from leaving.

We’re seeing this, in particular, in North America and Europe. Increasingly, exit from these countries is not by right, but by permission. And those restrictions are tightening.

One essential principle in the definition of a “free” country is that a free country is one that you can leave at will. The greater the restrictions on leaving, the less free the country is.