America in the Post-Freedom Era

In June of 2015, Donald Trump announced his candidacy for president of the US.

At that time, his candidacy was looked upon as a joke, and indeed, well into the campaign in 2016, both Democrat and Republican politicians treated a win by Mister Trump as a ridiculous impossibility.

Yet, at that time, I predicted that he’d win, as I believed that he would become an ideal tool for the Ruling Elite in their pursuit of far greater objectives than a mere presidency.

It was clear at the time that Mister Trump was a textbook narcissist who would seek maximum attention for himself whilst in office and would want all events to centre on himself on a daily basis. Conservatives would be encouraged by his bluster, whilst liberals would burst a blood vessel over his incessant posturing.

The reason for my belief was history. In 1928, Herbert Hoover, a millionaire businessman who had never previously held elected office was elected as the US president. He was set up by the ruling elite as a patsy – the guy who would take the fall for causing the crash that would occur in 1929.

It worked. Those who were responsible for creating the unmanageable debt prior to the 1929 crash could not only pass the blame to their sucker-president; they would also be left with an electorate that was so angry over the crash and resultant economic crisis that, in 1932, the elite were able to usher in an all-encompassing Democratic win.

The Democrats took both houses of Congress and the presidency in that election. Franklin Roosevelt, a banker and Wall Street insider, was presented as the friend of the little man. He promised to turn his back on his wealth, his business partners and family and institute a host of policies that would assist those in need… collectivist policies that would, in fact, help to enslave those whom he claimed to be assisting.

The electorate loved Mister Roosevelt, as they saw him as their personal saviour. The Ruling Elite understood that Mister Roosevelt was creating a regime of increased government control through which they, the Elite, would more greatly dominate the populace.

The anger over Mister Hoover and his capitalist principles was so great amongst the electorate that Mister Roosevelt effectively became president for life. And Democrats held both houses of government for twenty years. Only the post-war prosperity broke their hold in 1952.

In 2016, my belief was that we would see a repeat of this history. Mister Trump would be the buffoon who, by virtue of his own ego, would be in place when the crisis began in 2020. At that time, COVID was nowhere on the horizon, but it has since then served as a perfect cover for the economic crisis that is presently under way.

When I first wrote on this prediction, just after the 2016 election, there could be no way to know for certain to what degree the Great Depression playbook would be repeated, but we now know that opposition to the Trump presidency, whether justified or not, has succeeded in polarising Americans to a greater degree than any election since 1860.

America is now at war with itself and the stage has been set for a lurch into collectivism, courtesy of the latest version of a Roosevelt presidency.

So, what does that mean?

Well, if the prognostication is correct – if those who rule the US from behind the scenes do intend to pick up where the Roosevelt presidency left off, and usher in collectivism – we shall soon get a look at how the ruling elite intend to roll out the plan.

President Joe Biden has already made several references to his role as being temporary, stating that if he disagrees with his vice president, he actually plans to step aside and even that he may “develop some disease and have to resign.”

It would not be surprising if the intent from the beginning was that Mister Biden was a shill who would pass the ball to a hard-hitting replacement – one who could not otherwise have been sold to the American people.

Kamala Harris dropped out of the presidential race in December of 2019, as she was only able to attract 2.8% of the Democratic vote. And as Democrats represent about half the electorate, that translates into about 1.4% of support from the American people.

Yet, supported or not, we may very well soon see a Harris regency presidency. As her reputation has been that of an aggressive far-leftist, her leadership promises to take the US far more quickly in a collectivist direction than Mister Biden might have.

But isn’t there a flaw in this presumption?

If the ruling elite, who run the show behind the scenes, are made up of bankers, Big Pharma, the military-industrial complex and Wall Street, aren’t they the country’s foremost capitalists? Wouldn’t they be opposed to a collectivist regime?

The answer is no. And to understand this, we can again look at history. In 1917, Wall Street funded Leon Trotsky in his move to defeat the Mensheviks in Russia and install Bolshevik rule. That funding made possible the Lenin/Trotsky regime.

In the 1930s Wall Street funded another form of collectivism – fascism – in Germany. The near-penniless Nazis received all the capital they needed to create a military intended to take over all of Europe.

What we can take away from history is that for those who are at the top level of rule – above the more visual but ultimately disposable politicians – the central objective is control. Create a powerful government from which all things flow. Debase the populace so that they have neither the economic power nor the ambition to think for themselves and take control of their own lives.

Subjugate the masses as completely as possible. Thereafter, the acquisition of wealth is a no-brainer. Those who possess totalitarian rule control the economy and all wealth that may be derived from it.

Regardless of whether collectivism is called socialism, communism, fascism or any other new “ism” that may in future be concocted, it’s the key to domination. Once a people depend entirely upon their government for all that they receive, they quickly learn to submit to whatever is demanded of them, no matter how extreme.

And so, in 2021, the groundwork has been laid for a major transformation of the US and, indeed, quite a few other countries that have followed a similar path.

We shall see a number of measures passed under the new rule that provide the populace with such “benefits” as debt forgiveness, universal basic income, greater privileges for minorities, etc.

However, these benefits will carry a price tag. There will be Immunity Passports, direct debit taxation, criminalised self-expression, a militarised police state and a host of other losses to freedom.

The greatest of these may well be heralded in through a constitutional review, which will be touted as seeking to answer the “inequities and shortcomings” of the 1787 Constitution but may end in a wholesale loss of “inalienable” rights.

However this plays out, it’s likely that 2021 will later be looked back upon by historians as the beginning of the Post-Freedom Era. 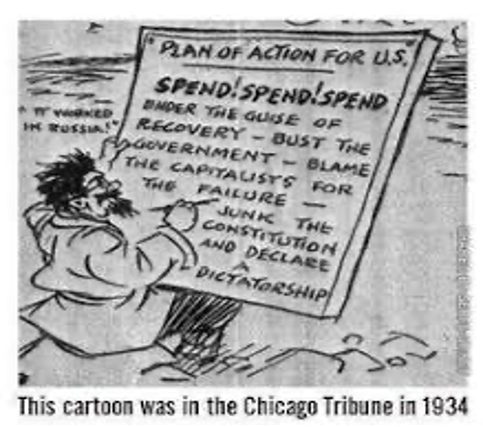 Editor’s Note:Unfortunately, there’s little any individual can practically do to change the course of these trends in motion.

That’s precisely why bestselling author Doug Casey just released Surviving and Thriving During an Economic Collapse an urgent new PDF report. It explains what could come next and what you can do about it so you don’t become a victim. Click here to download it now.