In such volatile times, let’s see if gold is whispering anything to us.

In this chart, you’ll see how the price ratio of one ounce of gold to the price level of the S&P 500 has varied over the years based on the monthly high closing price of gold.

The higher the ratio, the “more” expensive gold is relative to the S&P 500.  The opposite is true when the ratio is below one. 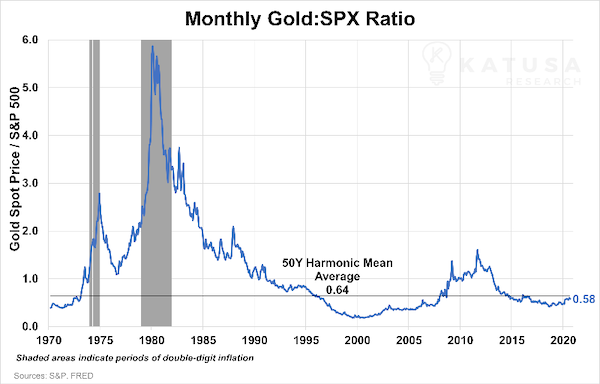 In other words, gold has a long way to run before it gets to its multi-generational average level with the S&P 500.

While the S&P 500 continues pushing its own all-time highs, it’s worth noting that only 239 of its 500 components—less than half—are up year-to-date.

Miners Freeport-McMoran (NYSE:FCX) and Newmont (NYSE:NEM) are the 50th and 51st best-performing stocks in the index, both up over 39% year-to-date. They are the only two base and precious metals mining companies in the S&P 500.

Real, or inflation-adjusted, prices can be calculated simply by using an inflation indicator.

The most well-known measure is the Consumer Price Index (CPI).

In this case, we’ll use the GDP Price Deflator, which is considered a more robust measure of inflation. 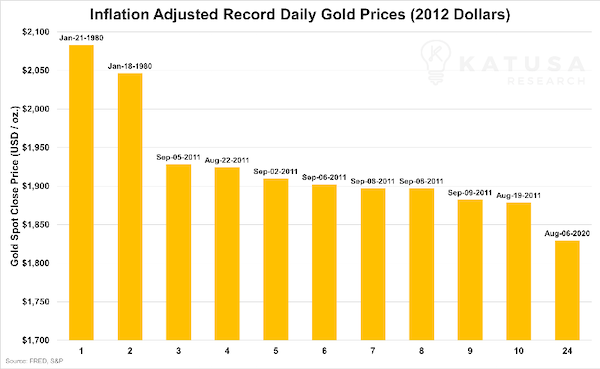 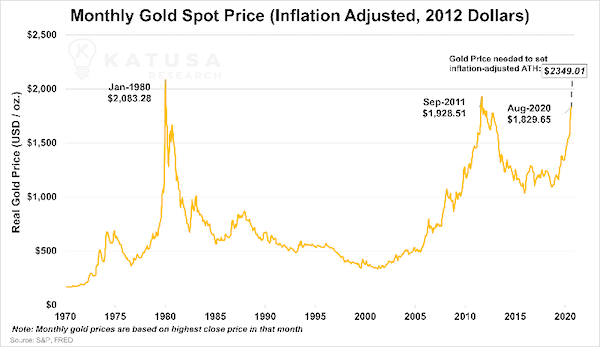 This chart might superficially suggest that gold’s current prices aren’t all that impressive.

But inflation measures have their limitations.

That is worth noting any time asset prices hit all-time highs—even in nominal terms.

In either case, the difference between previous inflation-adjusted highs means that gold still has plenty of additional price upside.

It’s no secret that mining stocks provide great leverage to the underlying metal they produce.

But are gold miners still a bargain in this market?

The short answer is yes, they are, when compared to almost every other industry in the stock market.

This is especially true when you consider that the long-term outlook for gold is bullish.

In the chart below, we look at Price to Forward Cash Flow Per Share (Forward CFPS) multiples, which tell us where stock prices are relative to the cash flows they’re expected to generate over the next 12 months.

If we look at gold’s top 10 daily closing prices after adjusting for inflation, we can see that they were all either in January 1980 or between August and September 2011. 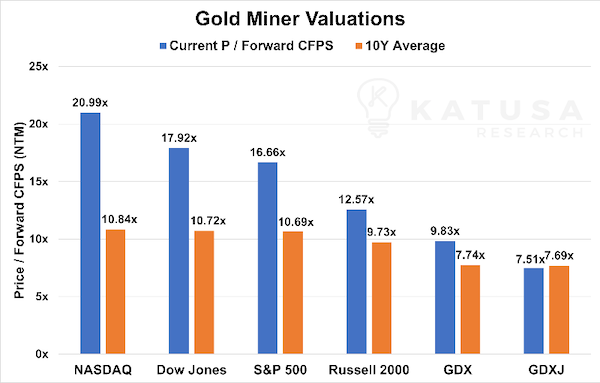 Gold miners, and especially senior producers, have benefitted greatly in this bull market.

Yet, the multiples for the GDX and GDXJ, the VanEck Gold Senior and Junior Gold Miner ETFs, haven’t shot up as much as the other major market indices.

In fact, GDXJ is below its 10-year average.

When you hear the words “frothy market,” just look at the NASDAQ and how its Price/Forward CFPS multiple is almost double its 10-year average; or how the big six tech stocks (FAANMG) make up 42% of the NASDAQ Composite’s market cap and 25% of the S&P 500, as of this writing.

All else being equal, if the price of either the GDX or GDXJ went up by 100%, they would still have lower Price/Forward CFPS multiples than the NASDAQ.

It’s not the most correlated data set, especially since the Federal Reserve hasn’t changed its gold holdings since April 2006; but the growth in the Fed’s balance sheet shows the extent of the massive stimulus packages. 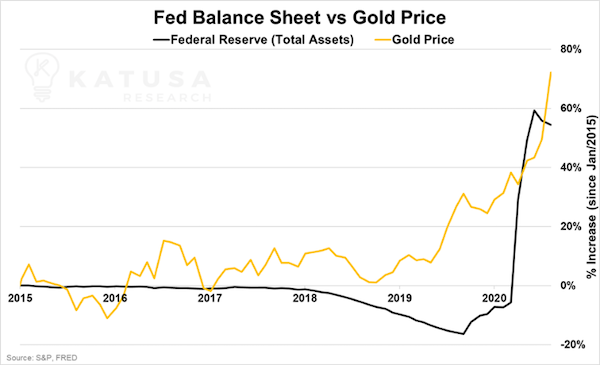 While the Fed has continued to disappoint many investors by not committing to a policy of yield curve control and rejecting a negative interest rate policy, low rates will likely persist until the end of 2022 at the earliest.

The Fed has staked its entire credibility on that timeline.

As a gold investor, it’s worth keeping an eye on Central Bank balance sheets as well as inflation expectations and real yields.

It’s been a record year for gold and also a defining year for gold-backed ETFs like the SPDR Gold Shares (GLD) or Sprott Physical Gold Trust.

In a year of economic devastation, rampant speculation in financial markets, rock bottom yields, and unprecedented changes to monetary policy orthodoxy—gold ETFs have been the vehicle of choice for major hedge funds and individual investors to de-risk and also benefit from surging gold prices.

With less than two months left in the year, gold ETFs across the world have already surpassed the previous annual record of gold ounces purchased, 20.7 million ounces (set in 2009), by over 45%.

In fact, that record had already been surpassed mid-way through the year, by June 30th. The additional 11 million ounces purchased since then have just been icing on the cake. 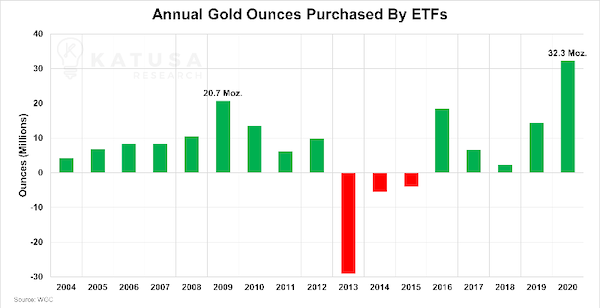 Based on all of the charts we’ve shown so far, all signs point to a bullish long-term outlook for gold and gold companies in the coming years.

Of course, that doesn’t preclude a reversal and consolidation of gold prices in the short-term.

If that does happen, there’ll be an incredible opportunity to build up your portfolio for the upcoming gold bull cycle.